Hurricanes and Past Climates 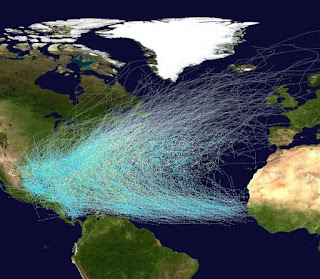 One of the main models used to predict how rising CO2 levels will impact the climate finds that rising temperatures should lead to more and more powerful hurricanes in the North Atlantic. Not all models show this, which we'll come back to in a minute, but anyway this connections is widely believed. After every hurricane somebody says that it was caused or worsened by climate change, and you can usually find people saying that things never used to be this bad. Is that so?

We have pretty good written records of hurricanes going back to the 1930s, and less good written records going back to 1851. These records do seem to show that 2000-2020 was a bad period. Of course 2022 was one of the weakest hurricane years on record despite being very warm in the North Atlantic, but nobody thinks the correlation is exact. But for something with such a big year-to-year variation, 90 years of data is not very much.

As it happens we have several methods we can use to estimate hurricane frequency and strength going back centuries. Hurricanes stir up the ocean floor and throw sand in crazy ways, and by coring into the bottoms of certain normally sheltered coves, or into "blue holes" in the Bahamas, you can find a record of how much sand was tossed around by storms at various times in the past. What do they show? 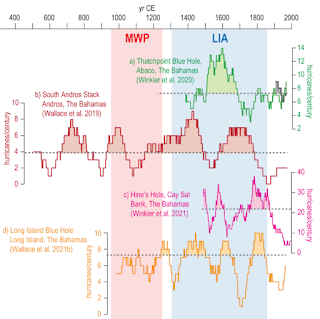 Hurricane proxy records from the Bahamas

The most studied place is the Bahamas, because it sees a bigger percentage of Atlantic hurricans than anywhere else. And Bahamanian records show that the past 150 years has been a relatively quiet period. If there is any correlation with temperature, it is negative; the Little Ice Age saw strong and frequent hurricanes, the Medieval Warm Period fewer and weaker ones. 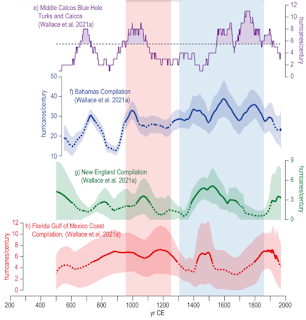 Here are some other series from other locations, which as you can see show quite a bit of variation. But only one, a compilation of New England records, shows that the current period is a bad one for hurricanes.
This does not mean that climate change is a hoax etc., it just means that the climate is fiendishly complex and more atmospheric CO2 does not seem to correlate in a simple way with more storms. As to why cooler temperatures might correlate with fewer hurricanes, the author of the article from which I got all this data has a theory:


The compiled Bahamian records document substantially higher hurricane frequency in the northern Caribbean during the Little Ice Age, around 1300 to 1850, than in the past 100 years.

That was a time when North Atlantic surface ocean temperatures were generally cooler than they are today. But it also coincided with an intensified West African monsoon. The monsoon could have produced more thunderstorms off the western coast of Africa, which act as low-pressure seeds for hurricanes.

So maybe the strength of the monsoon is more important than temperature, or maybe it is something else we know nothing about.
Posted by John at 6:41 PM