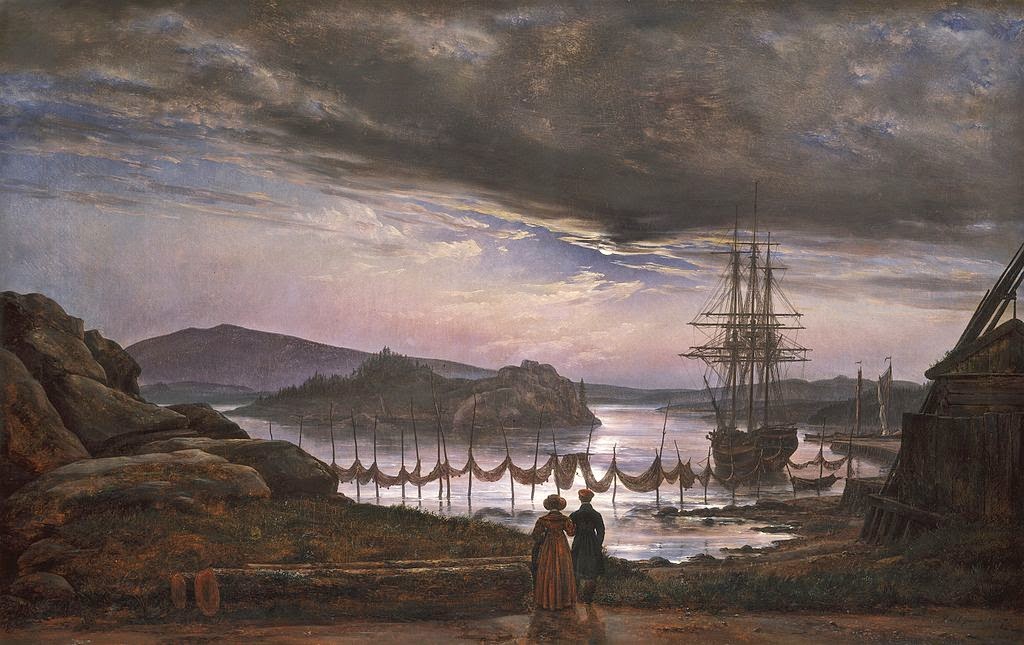 Johan Christian Dahl (1788 – 1857) was the first famous painter from Norway. He grew up poor, in Bergen, his father just holding the family together working as a fisherman and doing odd jobs around the harbor. Still, Dahl's artistic bent was recognized young and he was apprenticed to a local painter. This part of his career is obscure to me because the only detailed source I have found is in Norwegian, and Google Translate is very bad at Norwegian:


In his autobiographical records of recent years Dahl looks back on his youth with bitterness. He regrets that he never had any "real teachers" and believes that he is the "loop better circumstances Honours would have Bliva anything Andet and Fuldkomnere end what I became." . . . From 1803 to 1809 he was apprenticed to painter JG Müller, whose workshop was leading in Bergen. A craftsman education was not uncommon among artists, but Dahl looked back on their apprenticeships as "almost Trældomsaar" and accused Müller to keep their apprentices in "Expanding Domhed" for the better to exploit their labor.

I suppose that means he thought he was cheated of even greater artistic success by his poverty and lack of training, but since he was a lot more famous and successful than I will ever be I am short on sympathy. Plus, the hometown folks who gave him such a bad start eventually raised money for Dahl to travel to the closest real art school, in Copenhagen, where he arrived in 1811. (View from Vaekero near Christiana, 1827) 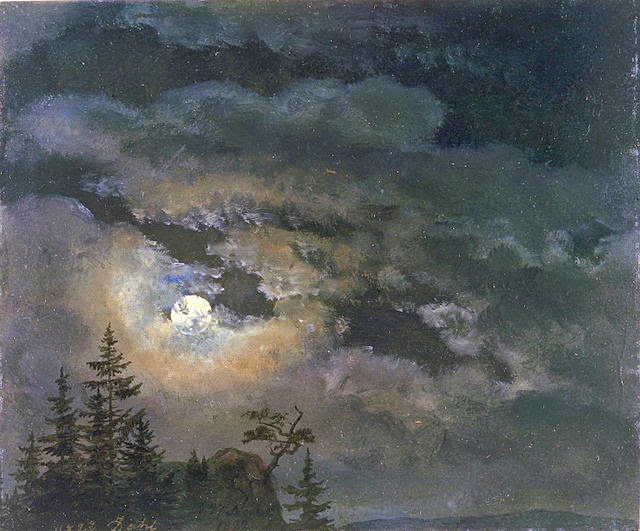 Dahl later ran down his Copenhagen teachers, too, but as our Norwegian source explains, this was probably to make himself seem more self-taught and original:


When Dahl in recent years invalidates their first teachers, I suspect they him to see himself as a true romantic genius - appeared fully finished "as Pilsen where life is skudt op af Earth".

He must have learned something in Copenhagen, because he emerged painting in the then stylish Romantic mode, lots of stormy skies and moonlight. (Study of a Sky by Moonlight, 1822). On the other hand he never did acquire some of the usual painter's skills, especially portraiture -- that was how most nineteenth-century painters earned their livings, and the portraits I have seen by Dahl are downright clumsy. 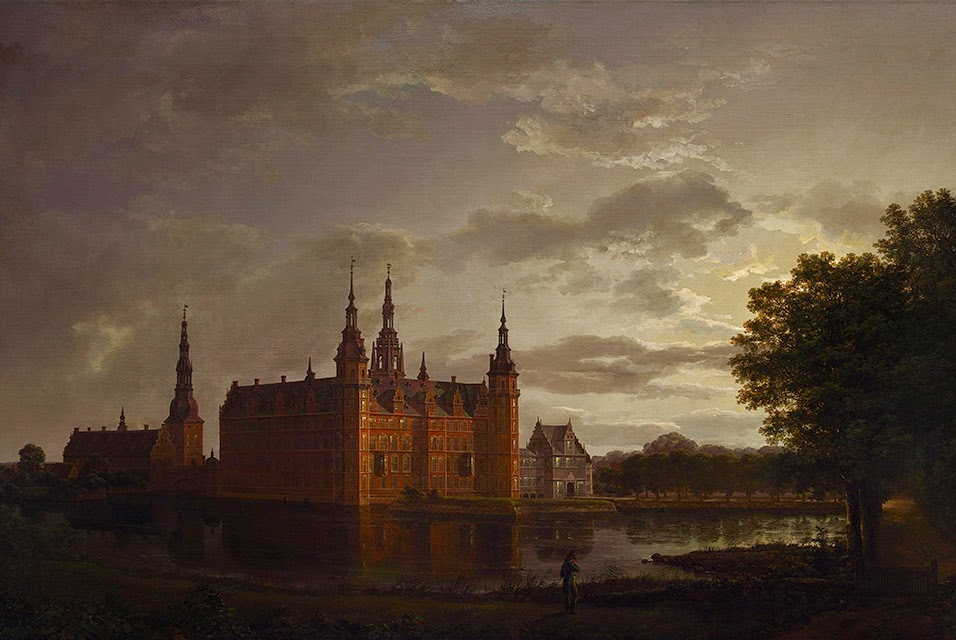 By 1818 he had sold paintings to the King of Denmark. (Fredericksborg Castle by Moonlight, 1817) 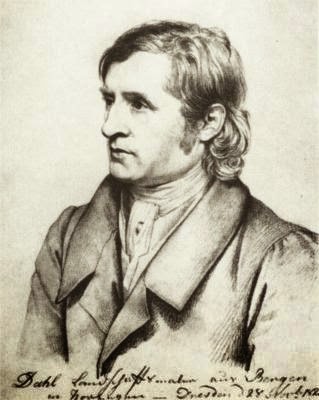 Portrait of Dahl in 1823 by Carl Christian Vogel von Vogelstein. 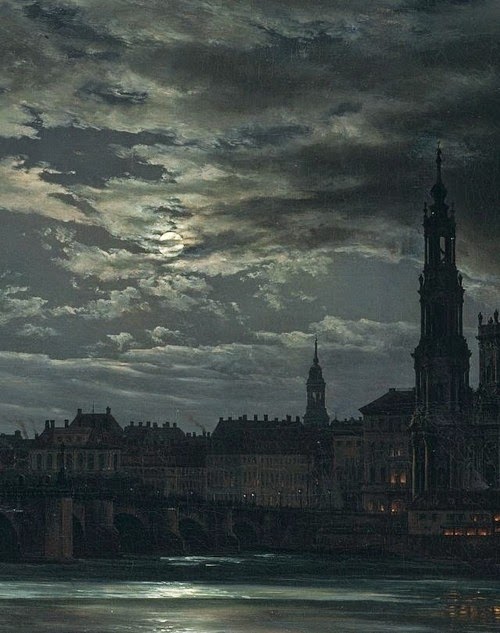 In 1818, his education complete and no great prospects opening up in Denmark, Dahl moved to Dresden to expand his horizons and continue his education. He lived there for the rest of his life, although he made several trips back to Scandinavia and others south to Italy (Dresden by Moonlight, 1830  -- this is the painting that started me researching Dahl). 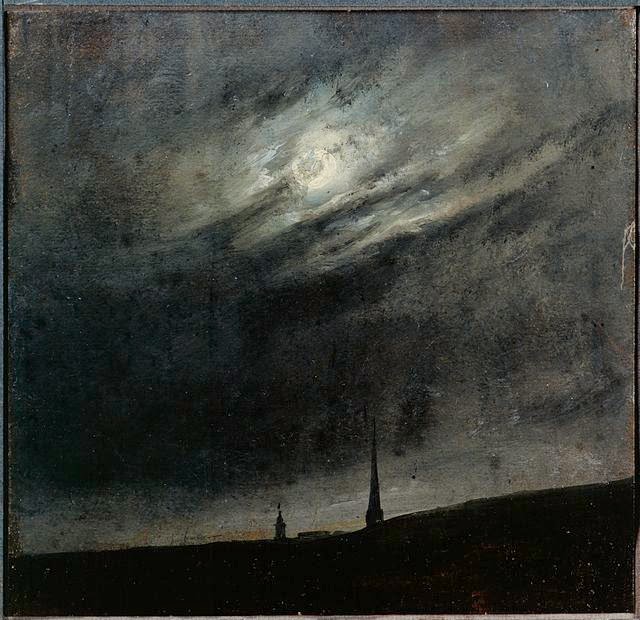 In Dresden Dahl became an instructor at the academy and, more importantly, fast friends with fellow painter Caspar David Friedrich. Friedrich had also come from a relatively impoverished background and studied at Copenhagen before settling at Dresden, so they had that in common. Friedrich was 14 years older, and he seems to have exercised a great influence on his younger friend. The two had quite different personalities; Friedrich was a melancholy brooder who liked to be alone, whereas Dahl was more upbeat and social. Still, they bonded in the way people with such differences sometimes do and spent much time together (Moon and Clouds over Dresden, 1827). 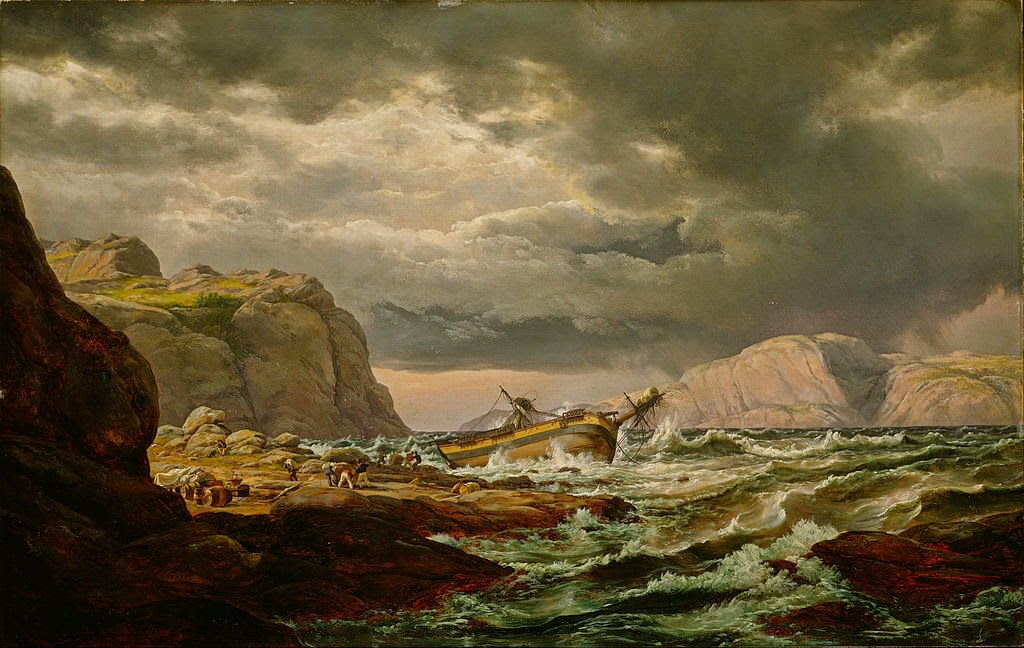 Dahl also married in Dresden, in 1820, to Emilie von Bloch. They had four children together but Emilie died after the birth of the fourth, in 1827; then two of the children died of scarlet fever. Dahl married again in 1830, to one of his students, but she died in childbirth just ten months later (Shipwreck on the Coast of Norway, 1832). 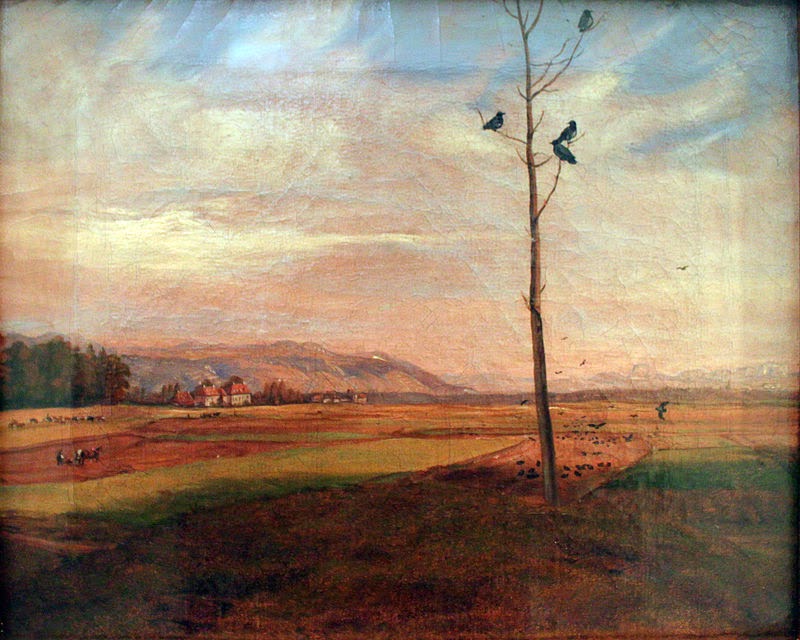 Dahl then withdrew from Dresden society for a time and considered moving back to Denmark or Norway:


Dahl lived secluded with her two surviving children, Caroline and Siegwald, aided by a faithful housekeeper did not seem to afflict the aging grouch unreasonable complaints. (Tree with four Robins, 1830) 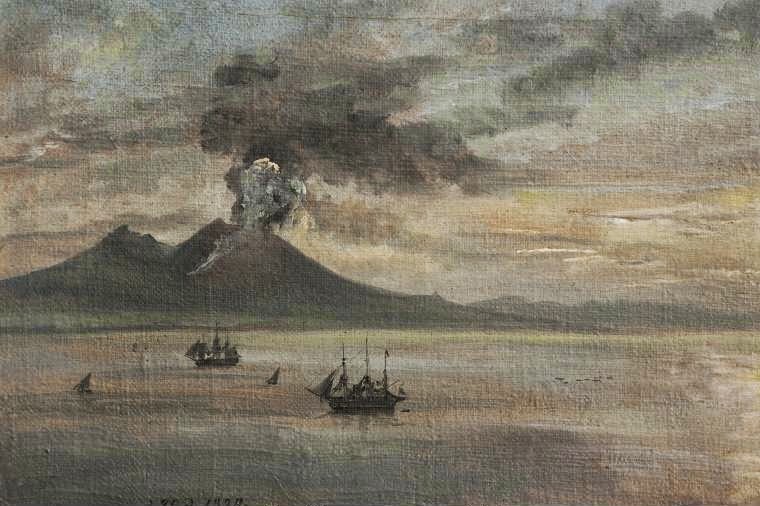 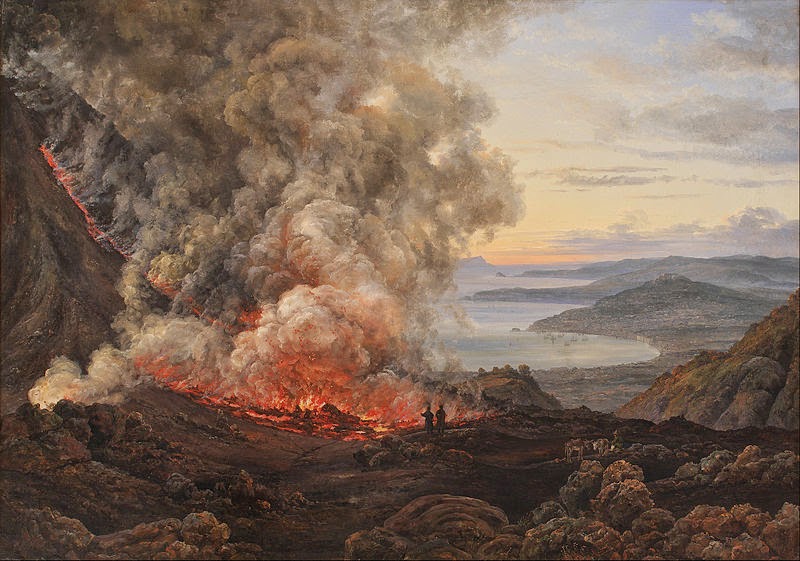 In the 1820s Dahl made several trips to Italy that were crucial in the development of his mature style. His first, in 1820 (he got married and then immediately left his wife at home for ten months) was financed by the crown prince of Denmark. Dahl happened to be in Naples in 1826 and painted several views of Mount Vesuvius erupting. 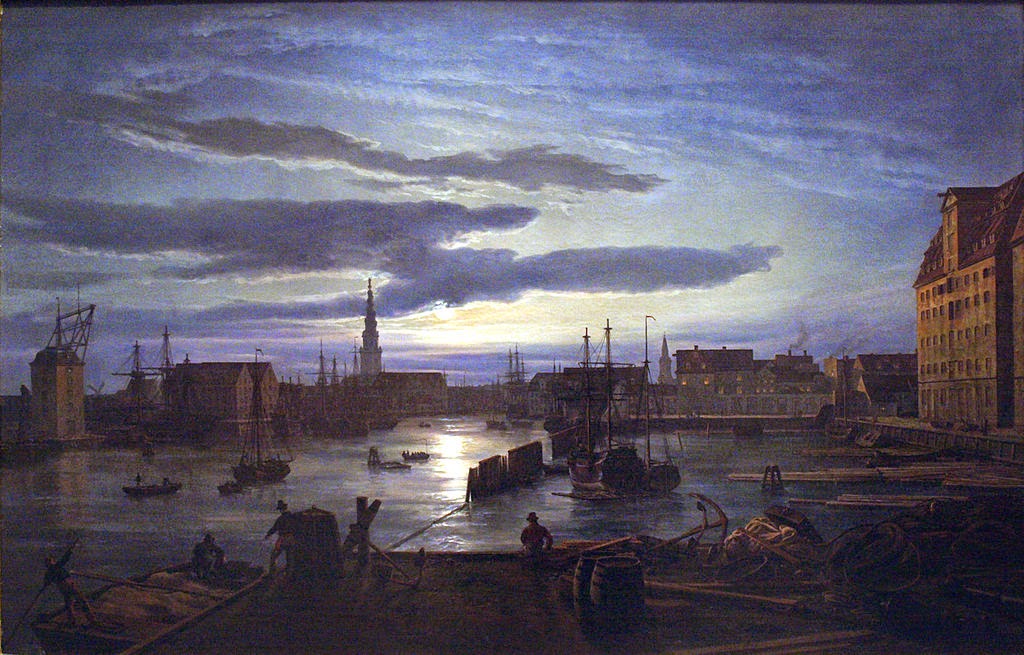 Dahl's artistic development was bound up with two tensions: between painting as observation of nature vs. painting as creation (in the Romantic mode of artistic greatness), and between his Norwegian roots and his Dresden immersion in European tradition. His paintings that circulate around the Internet are all moonlit scenes, and I have to think that moonlight was spiritual to Dahl in a way that bright daylight was not. The tradition that the spirit world is a place of dim or subtle light is a very ancient one, going back to primitive shamans and perhaps beyond that to dreams. Think of Tolkien's elder days, lit only by the stars. (Copenhagen Harbor by Moonlight, 1846) 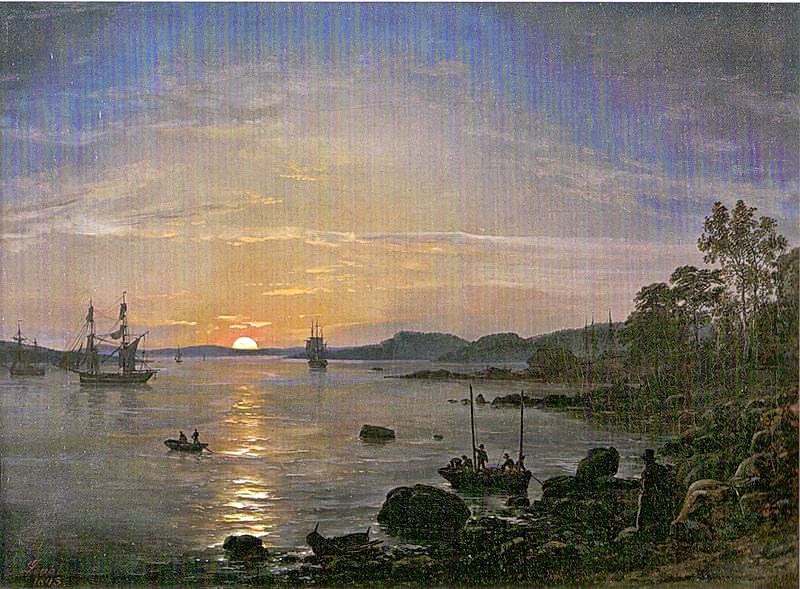 As for what Dahl himself said about his landscapes, well, here is something about (I think) why he was always drawn back to the landscape of Norway:


There's nothing there fængsler more it formed, Dybt sentient human end Naturskiønheden af ​​Foods prow and its public policy Dominions, and historical memories ... Nature and Overblivelsen af ​​man plants speak to us about the Past.

And there, my friends, we will have to leave the topic until we learn Norwegian. Holmestrand, 1843. 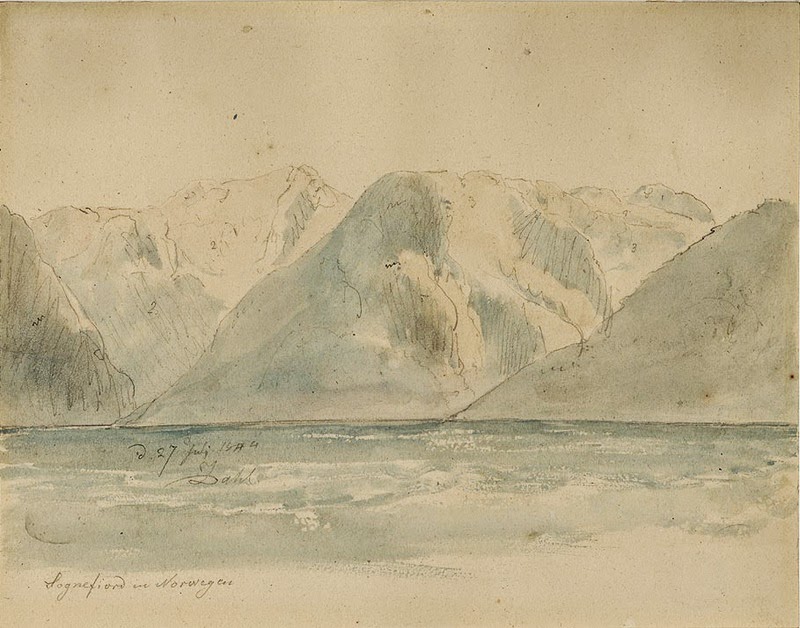 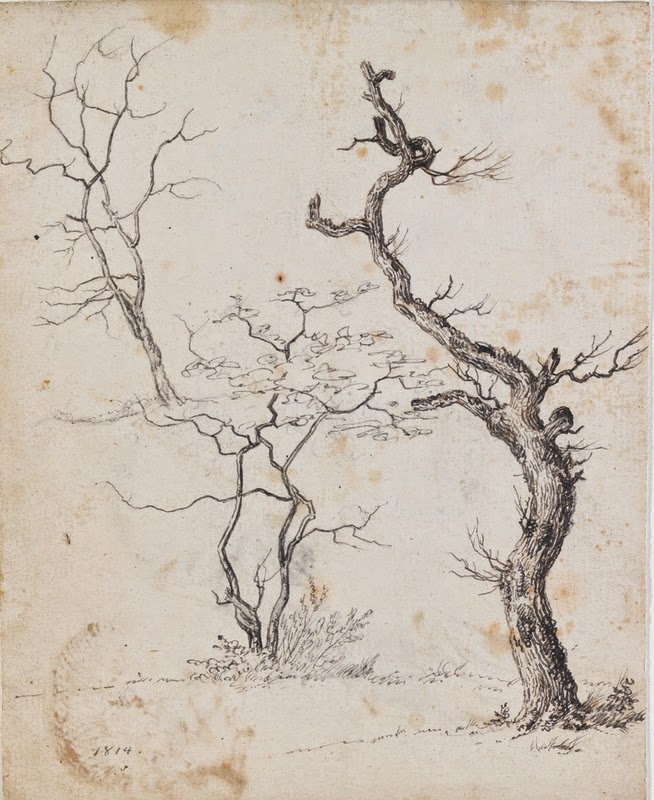 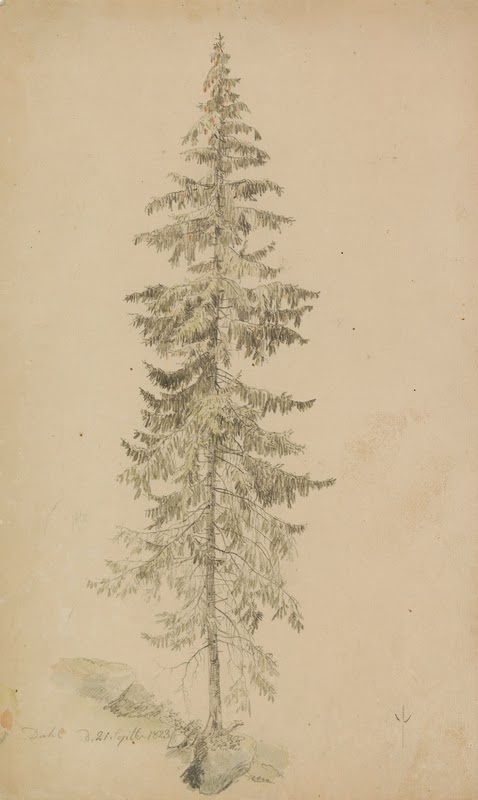 Dahl was a compulsive sketcher. He did almost all his painting in the studio; while he wandered the hills around Dresden with Friedrich, or hiked the Alps, or explored Italy, he drew scenes for possible later paintings. After extensive searching I finally turned up a trove of his sketches at the National Museum of Norway. Above, studies of fjords and trees. 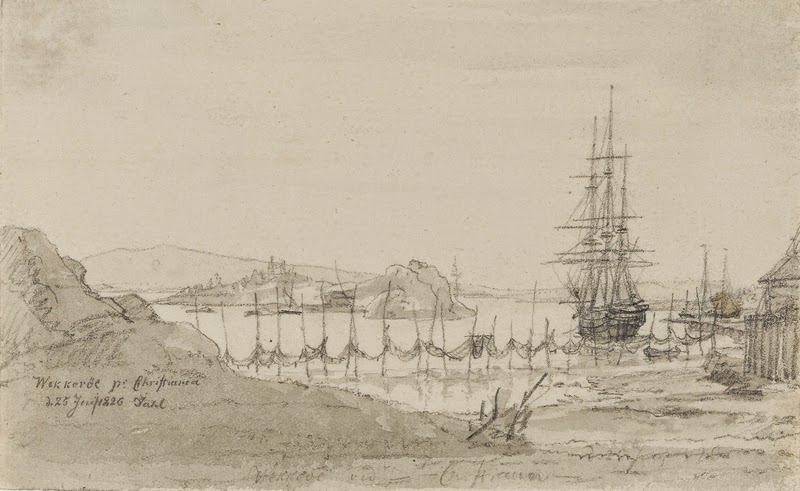 Here, I think, is the sketch on which the painting of Vaekero at the top of the post was based. 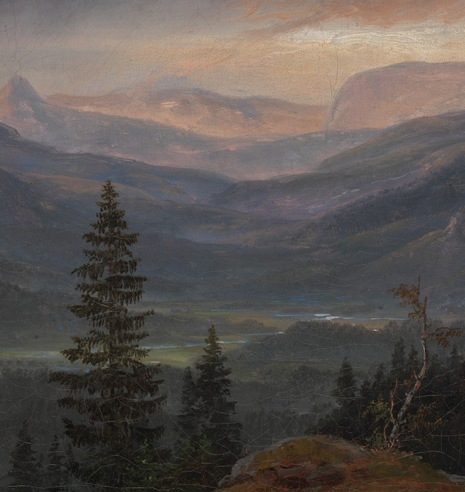 This is View over Hallingdal, 1844, one of Dahl's more successful attempts to fuse Romantic spirituality into a more or less accurate rendering of a Norwegian landscape. Dahl gave this to C.J. Thomsen, an eminent Danish archaeologist who was one of Dahl's mentors. 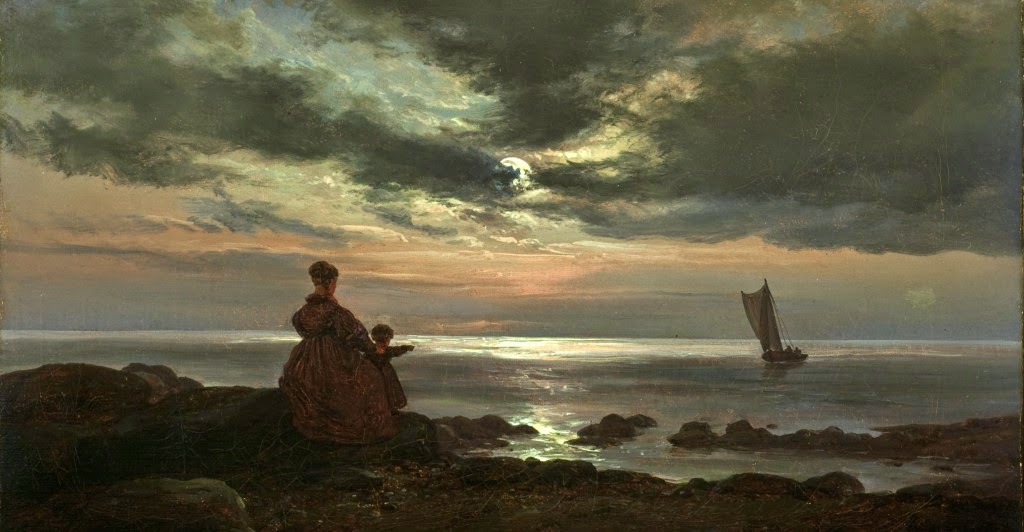 In 1840 Caspar David Friedrich died. Within the next six months Dahl had painted at least two versions of this work,  Mother and Child by the Sea. This looks very much like some of Friedrich's paintings and it is often seen as a memorial piece for his friend. 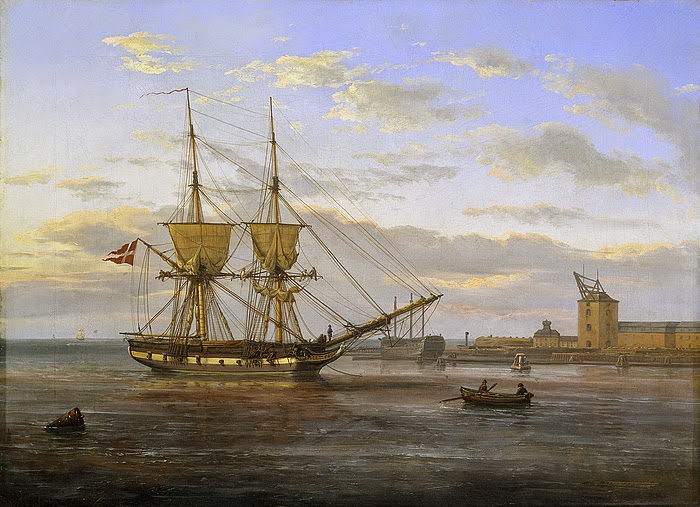 Dahl died in Dresden in 1857. He had lived long enough to see Romantic landscape painting go completely out of style, and even in Norway (where he was something of a hero) the academy of painting turned against his work. Both of his surviving children had moved back to Scandinavia, and Dahl's last years in Dresden were lonely and disappointed. But what a legacy he left for us. (Entrance to Copenhagen Harbor) 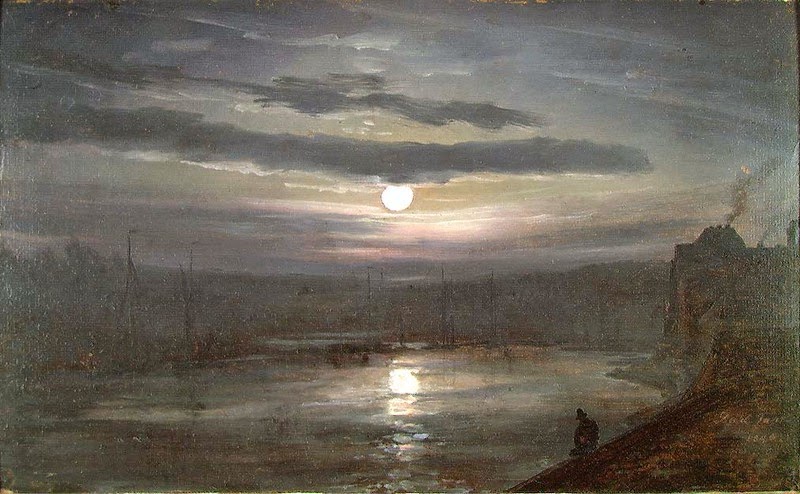 Moonlight over the Elbe.
Posted by John at 11:43 AM