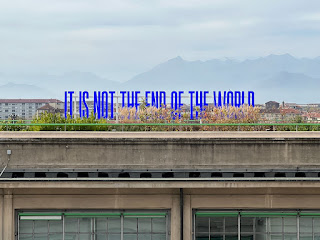 Semaglutide, which got started as a Diabetes drug under the brand names Ozempic and Rybelsus, has now been shown to be the most effective weight loss drug ever tested. But Scott Siskind notes that it costs $15,000 a year, and wonders what will happen when a significant portion of the more than 100 million overweight Americans want it.

A collection of Pictorial Maps of the United States.

The Guardian: "People in Woburn, north-west of Boston, have been subjected to a barrage of attacks and intimidation by a group of five wild turkeys, with the situation forcing some to take up improvised weapons and residents reporting being trapped in their homes." My solution for people trapped in their homes by turkeys is to give them all bats and copies of I Had Trouble in Getting to Solla Sollew.

Students in Beijing keep coming up with ever more arcane ways of voicing their protests, staying a move ahead of government censors. Now they're using equations.

The Webb Space Telescope gives us the most detailed yet view of an exoplanet's atmosphere, a gas giant 700 light years away.

Every Buddhist monk in Thai temple defrocked after testing positive for meth. According to this story, in Thailand meth is cheaper than beer.

More on AI winning at Diplomacy.

Jury convicts Oath Keepers leader Stewart Rhodes of Seditious Conspiracy over the January 6 riot while acquitting him of other charges that amount to pretty much the same thing. Juries are having trouble distinguishing between protest and seditious rebellion, and deciding what actions would add up to a conspiracy to undo an election. (NY Times)

NY Times article on offshore wind in Scotland, which is replacing North Sea oil as the economic engine of Scottish coastal towns. Many more farms are building or planned, but already Britain can get half its electricity from offshore wind on particularly windy days. And this is not a one-time jobs boon, because offshore turbines need a lot of maintenance and they will probably need replacement every decade or so.

Physicists claim to have created a wormhole using a quantum computer. If so, this might be more evidence that space-time is a sort of by-product of quantum information.

Twitter thread on why Russians are not protesting more.

NY Times story on oral exams, which the author thinks are sometimes better than written ones. One problem is the anxiety this causes in students, which has led in a couple of cases to suicide. I loved my Ph.D. oral exam and my thesis defense, but that was in graduate school, after years of intensive study; quite different for an ignorant undergraduate.

Traces of paint found on some of the statues at the cathedral in Florence.

And an all-white, non-albino bald eagle.

A strange little video and an argument that Russian soldiers are already dying of hypothermia.

Wagner-affiliated Greyzone blogger attacks those who blame mobilized soldiers for mistakes and cowardice, not noticing that they have been thrown into impossible situations with no training and no heavy weapons. Seems like another attack from Wagner against the Ministry of Defense.

Thread on the continuing usefulness of tanks. For one thing, correction by drones allows tanks to attack effectively in indirect fire mode, without coming in range of anti-tank weapons.

Ukraine is firing 2,000 to 4,000 artillery shells a day, or around 100,000 a month (NY Times). The US can only make about 30,000 a month, although, as I reported earlier, we recently allocated nearly $500 million to open new factories. Ukraine has announced that they can now manufacture heavy shells as well. Still, if artillery fire keeps up at this pace, someone is going to run out.

And more: By the count of the Ukrainian military, Russia has launched 16,000 missiles at Ukraine since February 24. The staggering rate of munitions consumption is why we're all going to be paying billions to buy more missiles and shells; some will go to Ukraine, some to Taiwan, some to long-term storage. Just in case. And speaking of which, the US has just awarded Lockheed $431 million to make more HiMARS systems and missiles.

And a thread on winter warfare.

More drones: "At this point, nothing gets done without (quad)copters."

Satellite images of new Russian fortifications in Kherson, east side of the Dnipro.

Brief note from Wagner about the fighting in Bakhmut; they are advancing because they "do not take losses into account." Losses of convicts, anyway.

Royal United Services Institute report on the lessons of conventional warfare in Ukraine; includes a good narrative of the fighting through August. In the "lessons" section they emphasize that modern precision weapons are so deadly that "defeating precision" is the key to survival, by such means as dispersion, electronic jamming, and blocking lasers with smoke: "there is no sanctuary." And, like everyone else, they say the very high rate of weapons consumption means Britain needs to stockpile more weapons.

Turkey is exploring building an aircraft carrier just for drones.

One way to shoot down drones without spending more money than the drone cost is to use a gun. For this reason the Ukrainian military loves the German Gepard anti-aircraft system, and they keep asking for more.

Stunning video shot in night vision from a drone, showing an attempted Russian infiltration attack near Bakhmut driven back by Ukrainian artillery. Notice the small size of the attacking force. For all the rhetoric about "human waves", the Russian are mainly attacking in groups of platoon to reinforced company strength; I have yet to see a video showing more than four vehicles in a single assault on this front.

Grim drone video of the ruins of Bakhmut.

What, no link to San Francisco's Robocop?

I guess a lot of countries are assessing the performance of these weapon systems in a war setting. I'm wondering when this is all done and over with, if the Ukrainian army won't be the most experienced and capable army in the world using them? Who will have more experience in a war setting?

That thread on why no protests in Russia is very interesting.