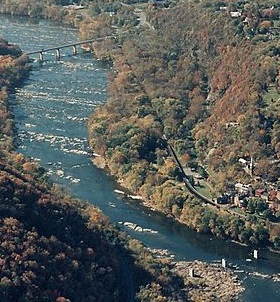 Virginius Island is a nearly flat 12-acre island in the Shendoah River next to Harpers Ferry, West Virginia, most famous as the site of John Brown's Raid. These days most of it looks like this, all trees and brush, with a few walking trails. The island is just a few hundred feet from where the Shenandoah joins the Potomac River, which is how Harpers Ferry came to be built there. 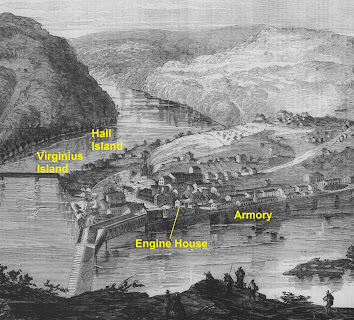 But in the 1850s Virginius Island was a factory town, part of a wider industrial zone that had grown up around the US Armory in Harpers Ferry. In its early days the Armory was one of America's most important industrial enterprises, not just turning out muskets but pioneering new techniques in manufacturing. The rifle works on Hall Island was the first plant in the Americas to use interchangeable parts on a large scale. When it was first set up the Armory used a craft production model, with workers being paid by the piece, but in the 1830s it was converted to rigid factory discipline with clocks and whistles and pay by the hour. It also completed dominated the town of Harpers Ferry, so much so that nobody else could readily buy land or set up a business there. 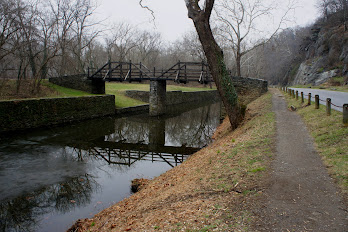 Hence, Virginius Island, an island of private property convenient to the industrial center that was the Armory. What launched industry on the island was the Shenandoah Canal, basically an improvement of the natural channel that separated Virginius and Hall Islands from the mainland. This never succeeded as a transportation route but it provided the water to power numerous mills. 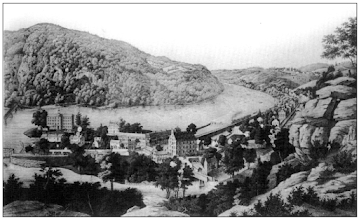 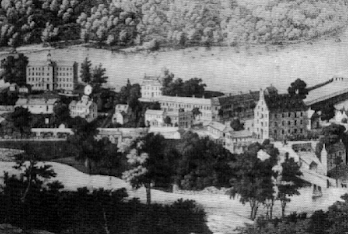 This 1857 lithograph shows Virginius and Hall Islands at their peak; the detail focuses in on Virginius. The image is fairly accurate as to the buildings, but it crowds them together and makes them a little bigger than they were, compared to the actual size of the island. The tall structure to the left was a cotton mill built in 1847, the one to the right a commercial flour mill. At that time there was also a sawmill with double 6-foot circular saws, a machine shop, a foundry, and a linseed oil mill, as well as numerous houses and smaller shops. The foundry and machine shop did a lot of work for the armory, making custom parts like huge steel shafts weighing multiple tons and well as molds for casting small parts. The Winchester and Potomac Railroad ran across the island, and from 1835 to 1847 there was a station in the center of town. 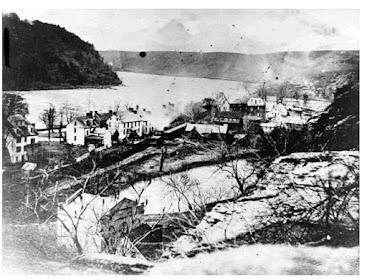 Virginius and Hall Islands in 1864, with the destroyed Rifle Works in the background

Then came the war, which wrecked Harpers Ferry. The Armory and the rifle works were destroyed. Virginius Island was taken over the by army, its buildings used as barracks and storehouses. After the war the government decided not to rebuild the armory, which pretty much doomed Harpers Ferry to decline. 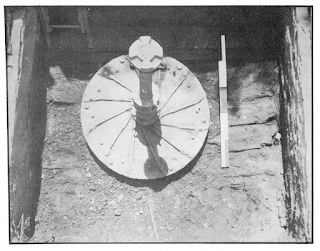 But Virginius Island bounced back after the war. A new owner purchased the old cotton mill and made it into a modern flour mill, with turbines and steel rollers. In 1870 about 103 people lived on the island, down from the 183 of 1850 but still a community. Photographs show the island dotted with ruins, which makes me wonder how people felt about them; did they often remember the old days when the place was bursting with activity, and bemoan that so much had been lost?

But then came the floods.

Harpers Ferry in the 1970 flood

Floods were nothing new to the people of Harpers Ferry, or to anyone who lived in the pre-modern world. The Sumerians personified the annual floods of the Tigris River as Ningirsu, god of destruction, but they still built their cities on the river's banks. Access to water was too valuable to move away just because the rivers flooded and killed a few people every now and then.

Nineteenth-century industrialists understood perfectly the trade-off between water power and the danger of flooding; flooding probably wrecked a mill somewhere in America every day. Harpers Ferry and the Armory were damaged by floods about once a decade throughout the nineteenth century, and until the Civil War everything was always rebuilt. But it turned out that Virginius Island was subject to two kinds of floods, depending on which river was running higher. When their flow was equal, or the Potomac was higher, water backed up into the lower Shenandoah, forming a sort of lake that dumped huge amounts of sand and silt, as much as two feet (60 cm) from some floods. But if the Shenandoah was running higher the river raged across the island with terrible force. This happened in 1870, apparently for the first time since Harpers Ferry was founded. The flood destroyed or badly damaged almost every building on the island. Archaeologists digging on the island in the 1990s found hardly any soil that dated to before 1870, so it looks like the flood scoured the island bare. Which explains why the island is so low even though a single flood can dump two feet of soil; what the river gives, the river also takes away. 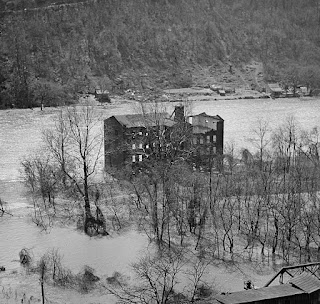 The old cotton mill in the 1924 flood

One of the few buildings that survived was the old cotton mill turned flour mill, and its owners rebuilt with newer machinery and forged on. But then another major flood hit in 1889, and they gave up. The equation had been changed by coal and steam, which provided alternative sources of both power and transportation. After eighty years, industry disappeared from Virginius Island. 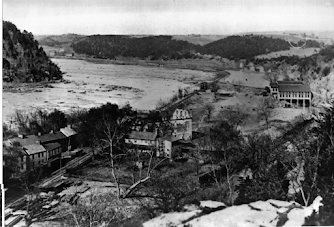 The Paper Mill (upper right) around 1900

However a new factory was built just upriver on Hall Island, the Shenandoah Pulp and Paper Mill. Paper mills are still built on rivers today, because the process takes, not just power, but huge amounts of water. That factory lasted until around 1936. People continued to live in the old millworkers' houses on Virginius Island, many working at the paper mill, others in Harpers Ferry. Incidentally the mill was the site of two noteworthy labor disputes; in 1888 the workers struck when the company asked them to work under a black foreman, and in 1909 they struck again for higher wages.

Most folks left after the destructive 1924 flood, which shut down the paper mill for nearly a year, and the rest were gone by 1935. The island was empty. 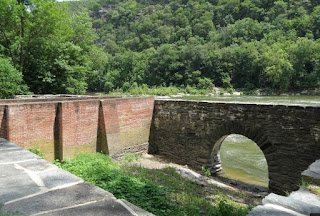 Now Virginius Island is part of Harpers Ferry National Historical Park, and you can walk there and see some of the surviving ruins. This is what remains of the cotton mill. 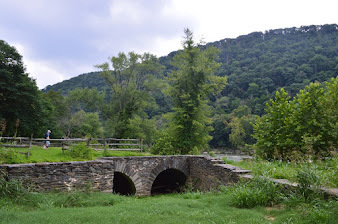 These tunnels carried water from a holding pond to the cotton mill.

When you do environmental impact statements you talk about "temporary" impacts and "permanent" impacts. "Temporary" means things that happen during construction but go away afterwards, like noise, dust, and traffic interruptions. "Permanent" means everything else.

But what is really "permanent'? A few years ago I sat in a meeting where people talked about "permanent impacts" to a wooded area near Washington, DC. But I know that the site was a factory just 80 years ago, and the oldest tree growing there now is no older than I am. Whatever is built there now will, I feel certain, be no more "permanent" than the factory that lasted about fifty years. How I feel about this depends on my mood. Sometimes it gets me down that a community can exist and be home to hundreds or thousands of people and then just disappear, their lives and homes vanished and forgotten. But sometimes I am moved by the healing power of the earth. Surely Virginius Island was once a grimy, smoky, dangerous place, where screaming saws and pounding hammers filled the air with the cacophony of manufacture. Now it is quiet, gentle, and lovely, covered with bluebells every spring. 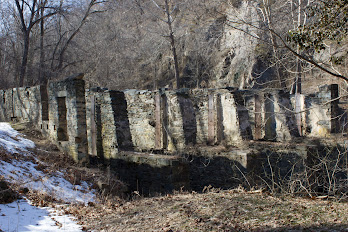 The ruins of the paper mill, slowing disappearing back into the earth.
Posted by John at 4:36 PM