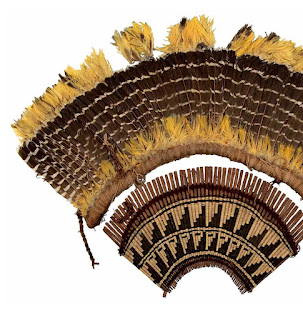 Ocucaje is a district in southern Peru, in the desert strip between the Pacific Ocean and the Andes Mountains. This is one of the driest places in the world. People were able to live there by combining irrigated agriculture, using rivers than run from the Andes down to the sea, with fishing in the extremely rich offshore waters. These days the area is wine country that sells "sun, sea, and wine" to tourists. 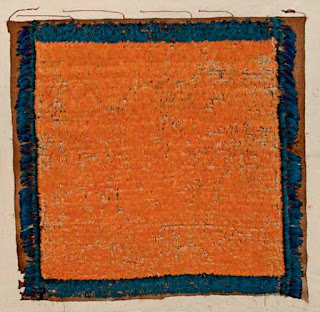 One of the main local centers of habitation surrounded the Hacienda Ocucaje, where the local Patron used to live and maybe still does. In 1901 an archaeologist named Max Uhle spent two months excavating in several cemeteries near the Hacienda. He shared his finds with the owner, and also purchased some other cultural materials from a local dealer. Apprised to the great value of what was buried around their fields, the owners turned to commercial archaeology as a way to supplement their incomes. Once Uhle was gone they returned to the cemeteries and began looting them. This seems to have been on a rather small scale until 1941, when an antiquities dealer name Pablo Soldi recruited a large crew and went at the job systematically. He had the contacts to move the pieces onto the global market, and they were scattered around the world. Because the place is so dry, and the cemeteries were placed in the desert beyond the cultivated fields, the preservation was extraordinary. The most valuable artifacts recovered were feather art like this panel and the headdress at the top of the post. 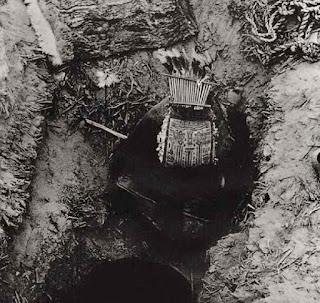 The tombs were rectangular constructions of adobe brick. The bodies had been exposed until they withered mostly away, and the mummified remains were wrapped into cloth bundles. The bundles were then decorated with feathers and covered with cloth. The tombs date to between 350 and 50 BC. Since then archaeologists investigating settlement sites have shown that around 350 BC the people of this region began leaving their small villages and congretating in walled towns; there is other evidence of warfare around that time, so that was probably what drove people to begin living behind walls. 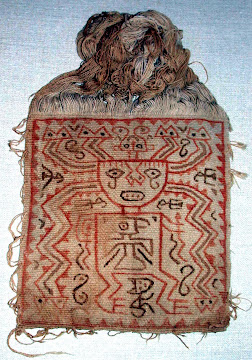 Here is a mummy bundle cover or face now in the Met. Some of the best artifacts from Ocucaje ended up there or in the Textile Museum in Washington, DC. 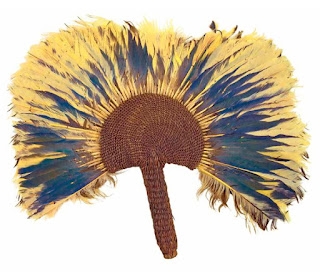 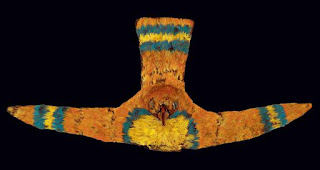 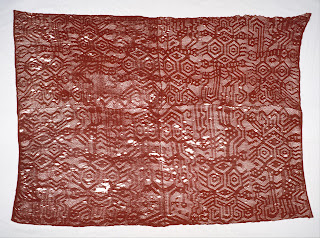 But feathers weren't the only remarkable finds. There was also, cloth, like this mantle.

And this border, which is one of the later finds, dating to the first century BC. 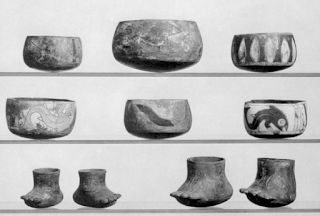 There were also remarkable ceramics, like this set, all from one tomb. Love the vessels shaped like feet. The fish shape is an orca, a common design element in the region down to contact. 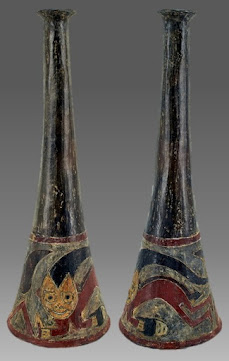 Ceramic trumpet, in the Met. 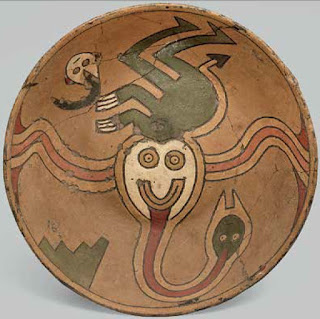 Numerous vessels and some textiles depict the "Ocular Being," so-called because of the exaggerated face with staring eyes. Some carry trophy heads, like this one, and some have snake-like appendages with additional heads and eyes, like this one. If you look closely at the red mantle above you can see a bunch of these. Nobody knows what this is or what it might mean. 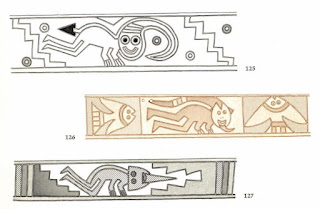 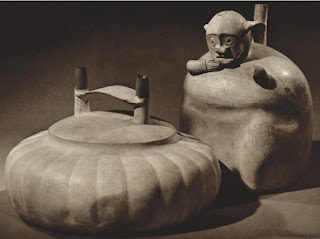 And pots from the late period, including a monkey effigy. 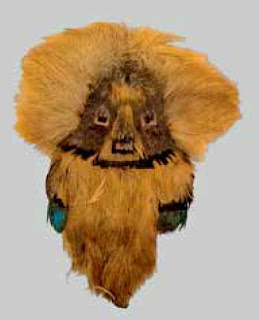 Its an amazing array of finds, especially considering that for the past 1500 years this has been a backwater where nothing much ever happened. Two millennia ago, things were different, and this small desert district was dominated by dynamic leaders who built new towns and extened their economic reach over the Andes to the districts where the birds who grew these feathers lived.