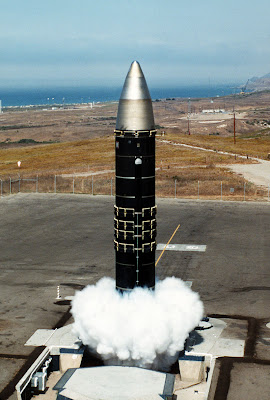 Now that both parties seem committed to cutting government spending, how about we save money on nuclear weapons? It's not like we're ever going to use them, and the amounts we still spend on our arsenal are not trivial. The Times:

Twenty years after the end of the cold war, the United States still has about 2,500 nuclear weapons deployed and 2,600 more as backup. The Obama administration, in an attempt to mollify Congressional Republicans, has also committed to modernizing an already hugely expensive complex of nuclear labs and production facilities. Altogether, these and other nuclear-related programs could cost $600 billion or more over the next decade. The country does not need to maintain this large an arsenal. It should not be spending so much to do it, especially when Congress is considering deep cuts in vital domestic programs. . . .

To get Republican senators to vote for the New Start treaty with Russia, the Obama administration promised all sorts of useless spending on the nuclear arsenal:

He promised to invest an extra $85 billion over 10 years for the nuclear labs to maintain and modernize the arsenal, including overhauling thousands of older bombs that should be retired. He proposed spending $125 billion over the next decade for a new fleet of nuclear-armed submarines, 100 new bombers, a new land-based intercontinental ballistic missile and two other missiles.

Which is just dumb. If the budget has to be cut, why would even Republicans want to save nuclear weapons at the expense of tactical fighters and army brigades that we might actually use? Much of the Pentagon is on board with cutting nuclear spending, especially the Army and Marines. Of course savings in this area don't happen right away, because decommissioning nuclear weapons costs a lot, but the Times came up with ways to save $100 billion over the next ten years.