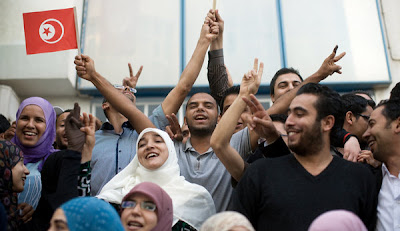 In Tunisia, the first election of the Arab Spring has come off peacefully and all sides are accepting the results. This is great news for Tunisians and good news for everyone in the Middle East. Tunisia is probably the most westernized Arabic-speaking country, so if they could not make democracy work, it is unlikely that anyone in the region could. Their success will encourage democrats elsewhere.

The party that won 40% of the vote, Ennahda, is described as "Islamist," but this is a little tendentious. So far as anyone can tell at this point, they are Islamic in about the same sense that Italy's Christian Democrats are Catholic. Their Islam does not pose any great threat to democracy or human rights. They will probably turn out to be more conservative about social issues and women's issues than I would like, but, hey, they won the election. Since every poll ever taken in the Arab world shows that most people want their governments to be explicitly Islamic, it is not possible to have states in the region that are democratic without being Islamic in some sense. Parties like Ennahda or the Turkish Justice and Development Party represent the liberal side of what is possible, and we should cheer that.
Posted by John at 7:31 AM