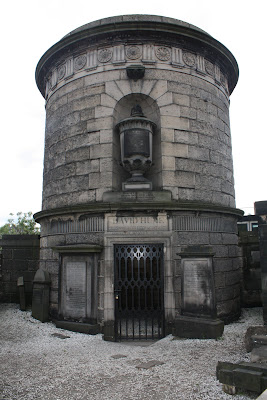 The mausoleum was designed by his friend the famous architect Robert Adam, matching the philosopher’s wish that on his death a "Monument be built over my body ... with an Inscription containing only my Name and the Year of my Birth and Death, leaving it to Posterity to add the Rest."

This is typical of Hume, whose outstanding intellectual virtues were modesty and fairness. No writer has ever been better at summarizing the best arguments of his opponents, and he managed to keep an open mind about far more things than most people can. His famous skepticism was also moderate, and even while attacking other writers he still looked for insights in their work. I regularly peruse small chunks of his books because of the way he explores ideas and tries out all sides of a problem, always seeming very sensible and down to earth. (I confess that I tire quickly of abstraction, though, so I can't read more than ten pages at a time even of philosophers I like.) He did lack imagination -- his essay on tragedy is remarkably stupid, because he simply could not understand why people enjoy seeing heroes destroyed by fate. He would no doubt have been mystified by horror movies. His political writing is limited because he did not see that industrialization was going to radically change the agrarian, aristocratic world of old Europe. But then how many people did?

Hume saw very clearly through the fog of obfuscation that surrounds most philosophy and theology, which he summarized like this:

Principles taken upon trust, consequences lamely deduced from them, want of coherence in the parts, and of evidence in the whole, these are every where to be met with in the systems of the most eminent philosophers, and seem to have drawn disgrace upon philosophy itself.

If he did not, in the end, do much better at systematizing than Plato or Aquinas, at least he understood the limits of his own understanding.

For an interesting view of Hume's religious thinking, see this essay by Simon Blackburn.
Posted by John at 7:46 AM