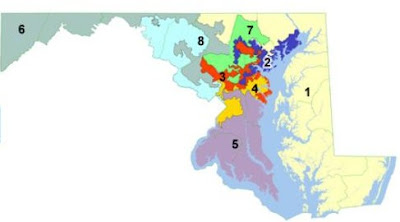 Maryland's all Democratic state government has hit on a scheme to strike a blow for the national Democratic party, by flipping one of the state's 8 Congressional districts from Republican to Democrat. The district in question is the Sixth, in the mountainous western part of the state, long held by the now 85-year-old Roscoe Bartlett. The plan divides the state's Republican-leaning mountain people into two districts, each of which also includes enough Montgomery County suburbanites to insure a Democratic majority. Meanwhile the state's other two big masses of Republicans, on the eastern shore and in Cecil and Carroll Counties north of Baltimore, are lumped into one district that will probably be 75 or 80 percent Republican.

I hate this kind of crap. I think the country either needs to move to a system of non-partisan commissions or set some kind of limit on the amount of boundary snaking permitting in district drawing. (Say by setting a limit, at some defined scale, on the ratio between the perimeter and area of a district, with any segment that follows a state or county boundary counted as a straight line.) I have read enough about the issue to know that this isn't really the root cause of America's political problems (consider that the senate is nearly as messed up as the house), but it just galls me to see politicians conniving behind the scenes in this nakedly cynical way.
Posted by John at 6:05 AM

yep. and let's please be rid of the electoral college while we're at it. what sort of self-termed democracy would permit representatives not elected in some non-electoral college to trump the entirety of the popular vote, thus effectively having power to upend the electorate's vote?