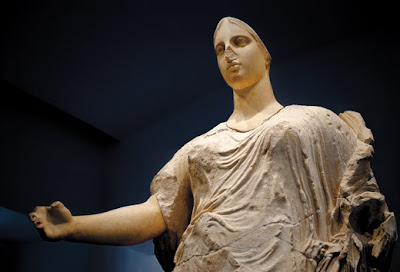 The Getty Museum has returned its looted statue of Aphrodite, which had been the centerpiece of the museum's classical collection, to the Sicilian town from which it was taken in the 1980s. Given how much they have had to return lately -- 47 works, according to Smithsonian -- what do they have left? 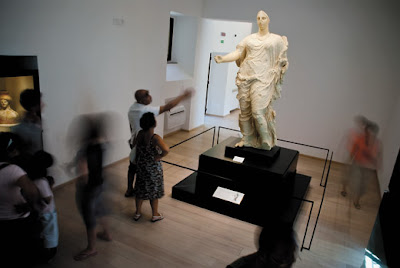 I remain, as ever, ambivalent about all of this. I fail to see what right the Italian government has to these works, many of which were probably stolen from Greece by greedy Romans. The practical effect will be to force looted works off the public art market, where they can be bought by museums, and into clandestine sales to secretive collectors. But I guess that the clear evidence of recent criminal activity made it necessary to do something about these pieces. 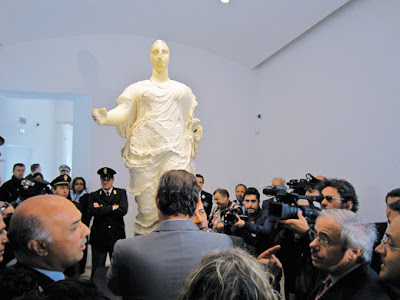 This image, of the official welcome reception for the returned statue, is captioned by Smithsonian "The goddess was greeted like a long-lost daughter in the Sicilian town of Aidone, where it was installed in the local archaeological museum." Yeah, right. If the townspeople were excited by the statue's return, it was because the press had riled them up about rich Californians stealing their heritage. After this year is out, I bet only the barest trickle of Sicilians will bother to visit this thing. They have so much classical statuary in Italy that most of it is just lying around in unheated warehouses, or even in open yards, slowly crumbling. You can't build anything in much of Italy without endless hassles over classical ruins, with nosy Germans and Englishmen demanding careful excavation, and most Italians are sick of it. Tombaroli, as they call looters in Italy, are folk heroes to much of the population. Greece is the same way; I once stumbled into a yard behind the municipal museum in Athens, where I discovered dozens of columns and other bits of classical buildings stacked piled in no particular order, covered with a dusting of snow. Why not send some of those columns to museums or universities in other parts of the world, that would take care of them and display them proudly? It bugs me that nationalism gets in the way of properly caring for the past. 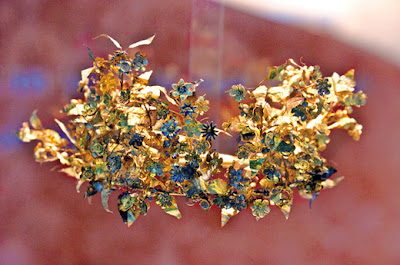 This wreath, no doubt looted from a tomb, is my personal favorite in the recent crop of repatriated items.
Posted by John at 6:35 AM