Some interesting data was just published on a culture called the Western Basin Tradition, a group that lived along the western margins of Lake Erie, including northwestern Ohio, eastern Michigan and southwestern Ontario, from A.D. 900 to 1600. These people lived after maize farming had been introduced into eastern North America, but the pattern of their sites suggests that they continued to live as mobile hunter-gatherers: lots of small sites rather than a few big villages. Yet analysis of the bones from a cemetery of this culture, carried out by Christopher Watts and his colleagues at the Royal Ontario Museum, showed that they actually ate a lot of maize. So these people adopted agriculture without settling down.

This has inspired some thinking about the "Neolithic Revolution" that I think is way overblown:

Western Basin people somehow incorporated intensive maize agriculture into their lives without substantively altering their traditional way of life. This upends the conventional model that the adoption of agriculture inexorably leads to social transformation.

The Neolithic Revolution, it appears, was not an inevitable consequence of the adoption of agriculture. People had a choice in how they would accommodate technological innovations such as agriculture.

But these results really challenge nobody's understanding of anything. When a culture adopted agriculture, the transition to settled life and all the rest of it was often drawn out over centuries. Where you see an abrupt break in the archaeological record, that usually means hunter-gatherers have been replaced by invading farmers, rather than instantly changing their whole way of life. (In fact Western Basin people had been replaced across much of their range by village building people well before 1600.) Even the "settled, agricultural" Indians encountered by the Europeans in the 17th century still had many hunter-gatherer ways and traditions. Here is John Smith's classic account of the Indians he met around the Chesapeake Bay:

In March and Aprill they live much upon their fishing, weares; and feed on fish, Turkies and squirrels. In May and June they plant their fieldes; and live most of Acornes, walnuts, and fish. But to mend their diet, some disperse themselves in small companies, and live upon fish, beasts, crabs, oysters, land Torteyses, strawberries, mulberries, and such like. In June, Julie, and August, they feed upon the rootes of Tocknough, berries, fish, and greene wheat.

It is strange to see how their bodies alter with their diet; even as the deare and wilde beastes, they seeme fat and leane, strong and weak.

So there is nothing unusual about people planting corn while remaining mobile and depending heavily on wild foods. That is probably how most hunter-gatherers who adopted farming lived. Eventually, of course, most people changed their ways. Probably they settled down because of rising populations and increasing conflict over land, that is, indirectly as a result of other things caused by farming, rather than just to hang out by their fields. In fact some farmers never really settled down: the ones we call slash and burn (swidden) agriculturalists wandered around their forest homes for millennia, and some are still at it. 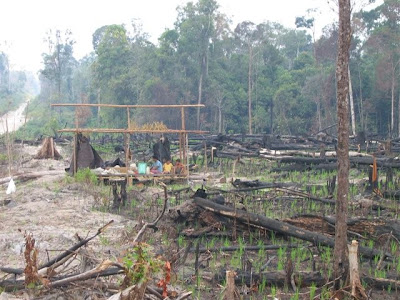 History is not neat, and events do not have the same effects every time they occur, in every circumstance. But the adoption of farming was still one of the most important changes in human history.
Posted by John at 7:57 AM