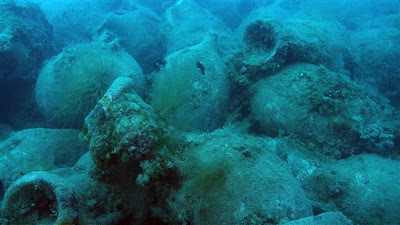 Analysis of DNA from ancient wine jars turned up some stuff other than wine:

Archaeologist Brendan Foley of Woods Hole Oceanographic Institution (WHOI) in Massachusetts and geneticist Maria Hansson of Lund University, Sweden, retrieved DNA from nine amphorae — the storage containers of the ancient world — from sunken ships dating from the fifth to the third centuries BC.

The researchers found grape DNA — as would be expected for containers of wine — in only five of the nine jars, and olive DNA, possibly from olive oil, in six of them. Other 'hits' included DNA from legumes, ginger, walnut and juniper and from herbs such as mint, thyme and oregano.

As this science gets better, it will tell more and more things about the past -- like that the jars often assumed to have been full of wine or oil might have held other things. I would note, though, that the herbs could have used to flavor olive oil, and juniper to flavor wine, so the data don't prove as much diversity in trade goods as these guys want.