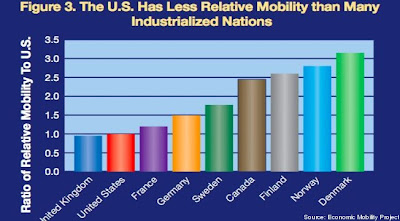 Paul Ryan recently made a speech in which he argued that his low tax, small government agenda would increase "equality of opportunity" in America. He said:

We are an upwardly mobile society with a lot of income movement between income groups. Telling Americans that they’re stuck in their current station in life, that they’re a victim of circumstances beyond their control, and that the government’s role is to help them cope with it — that’s not who we are, that’s not what we do.

In Europe, by contrast:

Top-heavy welfare states have replaced the traditional aristocracies, and masses of the long-term unemployed are locked into the new lower class. The United States was destined to break out of this bleak history.

All of which is completely wrong. Studies by the Economic Mobility Project (see table) show that there is much less economic mobility in the US than in the high tax countries of northern Europe. Only famously class-bound Britain is our equal in keeping the rich rich and poor poor.