Mongol Ships and the Divine Wind 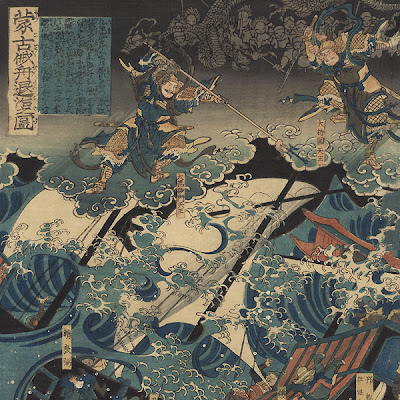 The wreck of a Mongolian ship presumed to have been part of a 13th century invasion fleet has been discovered beneath the seabed off southern Japan. The vessel is the first of its kind to have been discovered relatively intact and dates from a series of attempts by Kublai Khan, emperor of the Yuan Dynasty, to subjugate Japan between 1274 and 1281.

Researchers have previously only been able to recover anchor stones and cannonballs from the scattered wrecks of the Mongol fleets and they believe that this latest find will shed new light on the maritime technology of the day.

The warship was located with ultrasonic equipment about 3 feet beneath the seabed at a depth of 75 feet. The archeological team, from Okinawa's University of the Ryukus, had been carrying out a search of the waters around Takashima Island, in Nagasaki Prefecture, because the area had yielded other items from Mongol ships.

Historical records suggest that some 4,400 ships carrying 140,000 Mongol soldiers landed in Japan in 1281 and skirmished with samurai in northern Kyushu. But after returning to their boats, the fleet was struck by a devastating typhoon that put an end to the invasion plans - a storm known to all Japanese as "kamizake," meaning divine wind, and again invoked in the dying days of the Second World War.

The researchers believe the boats tried to find shelter in the coves of northern Kyushu, an assumption borne out by the discovery by Professor Yoshifumi Ikeda's team. . . . 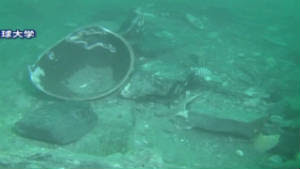 A section of the ship's hull was first found last year but a full archeological excavation only began on September 30. The researchers uncovered a keel nearly 50 feet long and more than 1.5 feet wide. Lengths of wood planking were still buried beneath silt alongside the main spars, they said.

The planks were as much as 9 inches wide and nearly 4 inches thick and were still coated in a grey paint. The planks had been held in place by nails and more than 300 bricks that were used as ballast were located throughout the site, along with ink stones and shards of Chinese ceramics. The archeologists have also recovered weapons and identified the remains of the ship's ribs and bulkheads.

The scale of this invasion has always astounded me, especially compared to the tiny fleets that Europe sent out in the age of exploration.
Posted by John at 7:15 AM