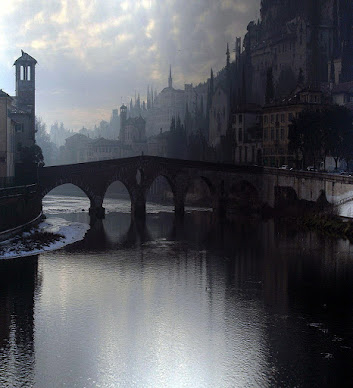 Verona is a small city in northern Italy, where the foothills of the Alps tumble down onto the alluvial plain of the Po Valley. It was founded in ancient times within a bend of the Adige River. It had two periods of glory that left it full of monuments: under imperial Rome, and in the 13th and 14th centuries under the rule of the Scaligeri or della Scala family.  This photograph, making the rounds on Tumblr, got me thinking about the city again. 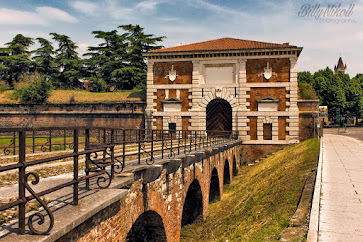 We begin our tour at the Porta San Zeno, a gate through the (mostly demolished) city walls built in the 1540s. 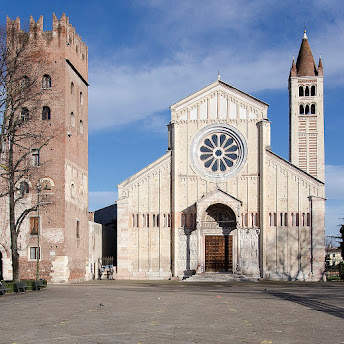 From the gate is it just a short walk to the first of many spectacular buildings we will see today, the 11th-century Basilica of San Zeno. 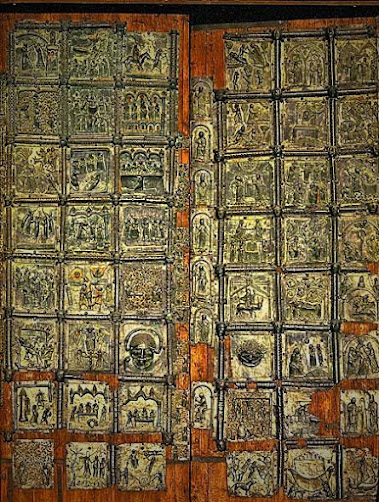 The great wonder of this building is its 11-century bronze door; for detailed views of the amazing Biblical scenes see this post I put up in 2012. The basilica also has an attached cloister with wonderful Romanesque details. 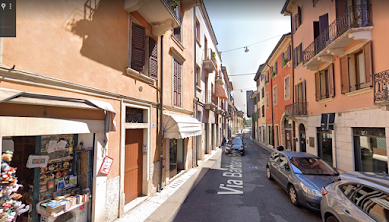 From there we walk a block down the Via Barberini Beto, lined with houses and shops, to the river. 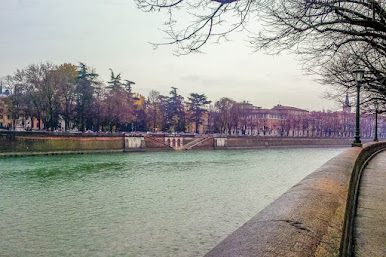 We'll stroll along for a couple of blocks through the waterfront park. 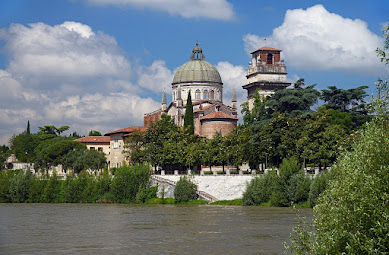 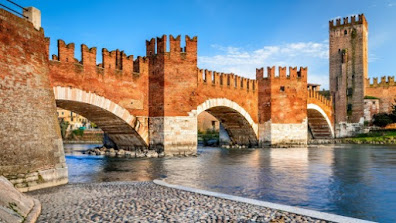 Until we reach our next historical monument, the Ponte Castelvecchio, built by the Scaligeri in the 14th century. 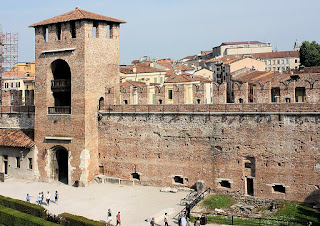 The bridge is attached to Castelvecchio, built by the Scaligeri as a residence and fortress – as much against their own people as against outsiders, you understand. After the city lost its independence in 1405 the various rulers, mostly Venice but at times Milan or Austria, often quartered their governor here. 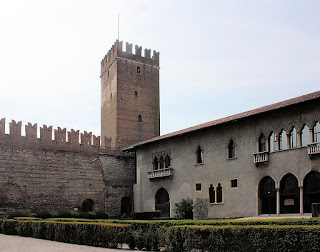 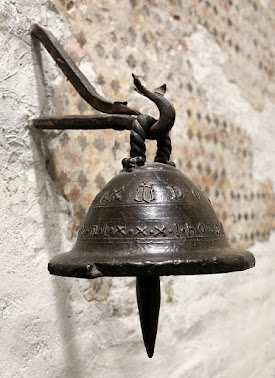 These days the castle houses the city's museum, which has a fabulous collection of everything from Neolithic pottery to 19th-century painting. 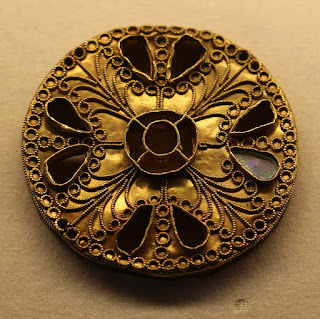 Verona was a prominent place under the Lombard kings in the 7th century, and excavations around the city have produced a lot of Lombard jewelry, weapons, and so on. 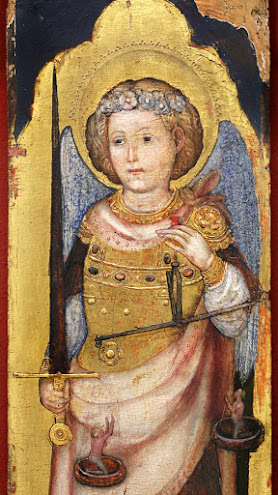 The museum is particular noted for its collection of medieval paintings, such as this early 14th-century work showing St. Michael weighing souls. 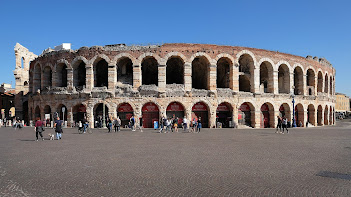 I could spend all day in such a place, but we must move on. It's just two short blocks from the Castelvecchio to the city's most famous monument, the Roman amphitheater, built in the 1st century AD. 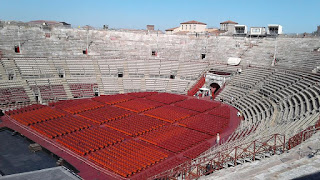 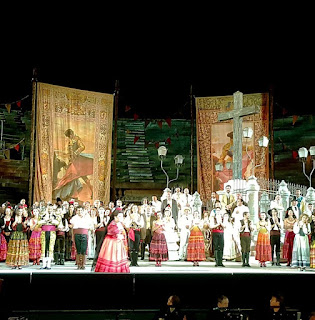 The building is wonderfully preserved, and operas have been staged there every summer since 1850. Others have also performed there, such as Paul McCartney and Bruce Springsteen. There is a museum across the street full of bits of Roman statuary and stone carving. 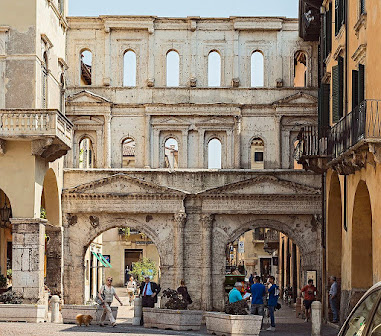 One more block and we reach the Porta Borsari, the city's main gate in Roman times. 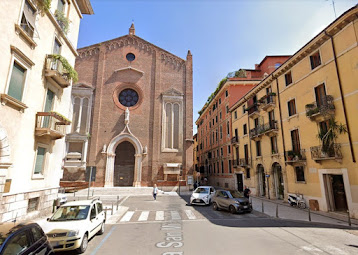 From there we'll make our way down more charming streets 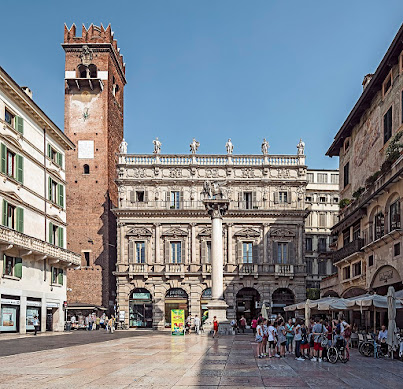 To the Piazza delle Erbe, the heart of the medieval town, and in the summer the site of an outdoor market. Historic structures are all around us: the town hall, guild halls, churches. 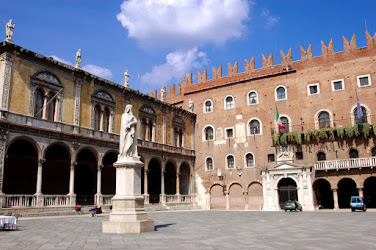 Adjacent is the Piazza Dei Signori, where the lords of the city lived before they built their castle. 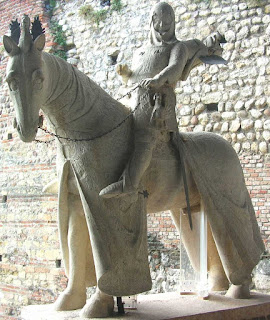 Medieval statue of the city's most famous ruler, Cangrande I della Scala. 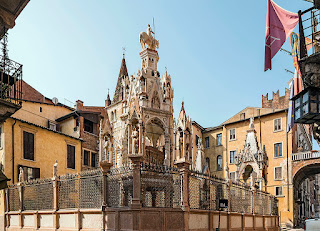 The tombs of the Scaligeri are around the corner; these were the subject of famous drawings by Ruskin that helped launch the Neogothic movement. 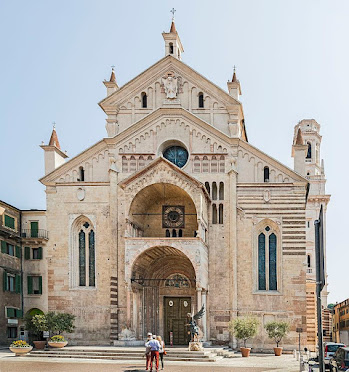 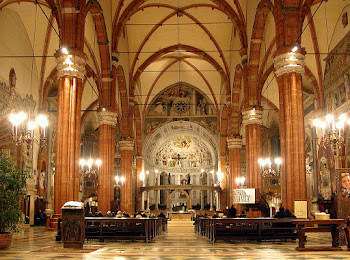 From there we walk three more short blocks to the cathedral, built in the 12th century. 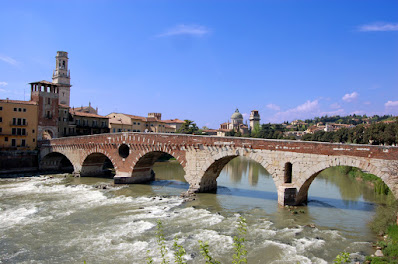 And two blocks beyond that is another of the city's famous monuments, the Ponte Pietra. This was a Roman bridge, but as you can see one pillar fell into disrepair and was restored. But this is Italy, so the new, restored part of the bridge dates to 1298. Also, since this is Italy, World War II happened, and two arches were blown up by retreating German soldiers. It was rebuilt in the 1950s using the original stones. 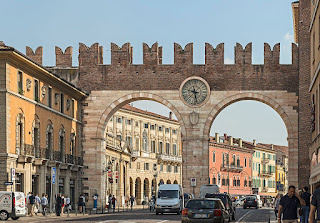 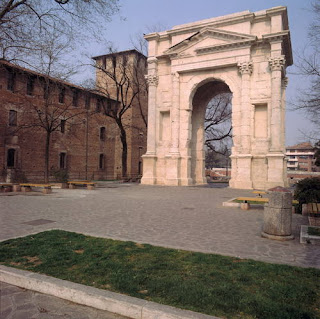 This short walk, less than 2 miles (3.5 km), barely scratches the surface of Verona. We have missed more Roman gates, more churches and museums, and we haven't even started on the whole Romeo and Juliet thing. Or on food, for which the city is famous. The world may be full of woes, but it also holds more wonders than one could ever see. 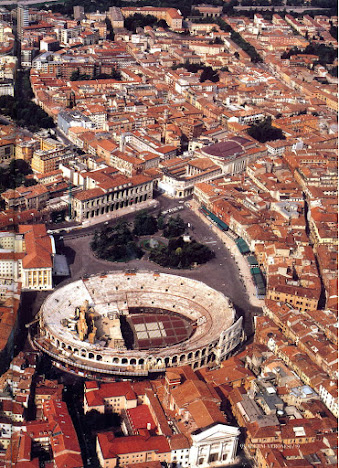