Estonian Folklore and the "King Game" 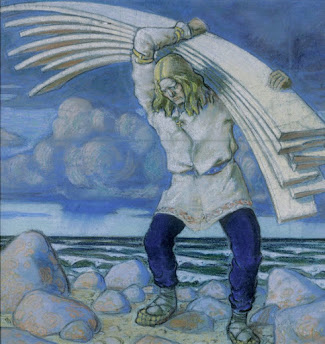 As in most European countries, nineteenth-century Estonian folklorists collected and published hundreds of pieces of folk verbal culture. In Estonia and Finland much of this was songs; the old lore of all the Finno-Ugric languages comes mostly in the form of songs. So modern Finns and Estonians have an inheritance of hundreds of old songs of various lengths. Nineteenth-century editors put what they thought was the oldest material together into epics (the Finnish Kalevala, the Estonian Deeds of Kalevipoeg) but that was largely their invention; what the folklorists recorded was just lots of songs and stories about the old heroes. (Something like the way an epic of Arthur was created out of a bunch of medieval songs and poems.)Of course nineteenth-century folklorists thought this stuff was ancient and pagan, stretching back to the early Middle Ages at least. But was it really? How would we know? Estonian folklorist Kristo Siig got to wondering if there was some piece of factual information in all those songs that he could tie to a particular period of the past. He hit on an old game called the Kuningamäng, or King Game:

In the beginning, players of the game are in a circle or in a row, walking or sitting. The player called the ‘King’ is separated from the other players, most frequently located in the center of the circle. The game (as in most older song games) begins with an introductory song from the players that involves most of the verbal part of the game. At first, there is a vocative address to the King, followed by a reproach that he has come at the wrong time, since the current economic situation is worse than the year before or than at any other earlier time. This is escribed in sharp contrast to beer flowing in rivers and wine from springs the year before: there is nothing left now, “in the poor time of spring”. The players also complain that the King is now taking the last of their possessions and assets, mostly described in terms of jewelry. Both statistically and structurally, this seems to be the most crystallized and coherent verbal part of the game.

The game then continues with the King taking away possessions from the players as pledges. This part also features some singing, but it is much less coherent and more variable. Lastly, the players turn to the King and request the return of their possessions. In the associated song, they often explain the origin of their jewelry by stating that these are personal items of emotional significance. At the same time, the players express reluctance to give the King domestic animals in exchange. In the action of the game, the pledges are returned when players perform tasks given by the king.

What the heck is this about?

For one thing, Estonia was ruled by foreign kings and emperors from the 13th century to 1918, most of whom never set foot in Estonia. So it's hard to see why any folklore since that time would focus on an Estonian king.(The Estonian word for king is a German load word, but Siig says the linguists agree it was borrowed a long time ago, certainly before the high middle ages.)  Second, the kings in the game don't do anything bureaucratic like collect taxes. They simply show up and demand to be fed and given "gifts." The people reply that this is a terrible time for the king to show up and make demands, since it has been an awful year; if only he had come last year, a time of plenty! The king, undaunted, takes their jewelry and will only return it when they give him what he wants, that is, food and domestic animals. Finally the conflict is resolved when the commoners do tasks assigned by the king.

This sounds, as Siig says, a lot like early medieval kingship. What kings did was travel around to various places and have the local people feed them. And what common people did in response to demands from kings was to plead poverty. (The poverty part of course went on for a long time.)

Such a system is known for example from Kievan Rus’ under the name poljud’e. According to Byzantine writers, the Great Prince left Kiev in early winter and travelled through all the lands of the Slavic tribes that held allegiance to him. In the spring, when ice on the Dnieper melted, he returned to Kiev laden with furs and other gifts.

So, says Stiig, maybe the King Game harkens back to the pre-Christian early middle ages. It's an interesting argument, but then I am predisposed to think that a lot of this stuff is thousands of years old.

Kristo Siig, "Kuningamän [‘King Game’]: An Echo of a Prehistoric Ritual of Power in Estonis." The Retrospective Methods Network Newsletter, University of Helsinki, 2012.

Absolutely fascinating. Thank you! The system of "feeding the king" has clear analogues to the Carolingian system as described by Fried. The elaborate back-and-forth also recalls the way early medieval kings, and often later ones, mostly couldn't get much done simply by issuing orders. They could do some things (getting the jewelry as a pledge), but then there would be a whole extended game around the king using that to actually make something happen, with plenty of complaining and back-talk from the subjects.