The Raven and the Crown 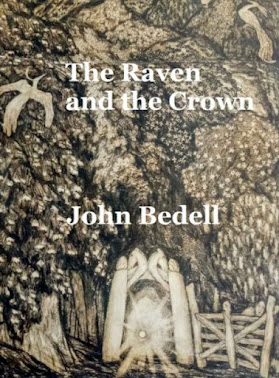 I have now posted my book to Amazon, where it is for sale as a paperback ($20) and for Kindle ($9.99). Sorry the paperback costs so much, but it's 550 pages and they charge a lot to print something that big on demand. My share is the same as for the Kindle version.

The Raven and the Crown is a historical fantasy, medieval history plus magic. Not fireballs, just the kinds of magic that people in European history have believed were possible, or liked to use in their own tales: shamanic journeys to the other lands, visions, healing, curses that made people weak and afraid. One of my aims was to capture what I love about the European past, both the picaresque reality of medieval life and the shattered remains ancient myths that animated their stories.

It began like this: in October 1990 I was sitting in the Public Record Office in London, reading court rolls from the reign of Edward II (1307-1327). At that time I was still getting the hang of the handwriting, the many abbreviations, and the other quirks of courtroom Latin. Most of the entries were brief and formulaic. So to improve my skill I sometimes worked my way through long cases that seemed interesting, even when they had nothing to do with my research. I found one of those cases and started in. I quickly found a word that took me several minutes to decipher; it turned out to mean "potions." Intrigued, I read the whole case, which I discovered was the trial of the guards in the Tower of London for allowing the escape of Roger Mortimer. Mortimer was one of Edward's great enemies, and he eventually overthrew Edward and took Queen Isabella as his lover. Of course this case had long ago been printed and translated, but I didn't know that; for me it was my discovery, the first great story I unearthed from beneath barriers of language and paleography. In his lifetime Mortimer had a sinister reputation and some thought he had sold his soul to the devil for power. The guards were acquitted, which I found fascinating; I don't see how their story of sleeping potions could have been true, but for whatever reason the King's justices decided to accept their excuse that Mortimer had magicked them to sleep from inside his own cell.

I thought, somebody should write a novel in which Mortimer is a real sorcerer.

Around 2010 I started to write it. I had already written one book, my mystery, and I was ready to try something more ambitious. I was inspired to think I could successfully fuse fantasy with history by The Wandering Unicorn, a wonderful book by Manuel Mujica Lainez, an Argentine writer of "magical realism." The basic spine of my plot was taken directly from the tumultuous reign of Edward II, full of violence and intrigue.

But while the king and queen appear as characters, I focused the story on two ordinary people. My regular readers will recognize here both my politics and the contours of my imagination, which loves to dwell on the small and strange details of life rather than the bright center. The lead characters are Eleanor Rushmere, a recently widowed midwife, heir to shamanic powers passed down through the women of her family but haunted by the ghosts of her dead children, and Thomas of Penrith, a clerk of the King's household with a gift for song and story.

In writing the story of Eleanor I tried to do something that I have rarely seen done well: to make a woman an epic hero without having her put on armor or otherwise act like a man. I wanted her to be a hero while being, in traditional terms, a woman. Magic provides a straightforward way to do this; to make simple virtues as powerful as swords. (One book I think does this well is Lois McMaster Bujold's Paladin of Souls, which won the Hugo. I did not read that until a couple of years ago, after the first draft of my book was finished, but I was cheered to see another writer try the same thing.) Much of what I wrote about Eleanor's magic springs from the other great theme of my life, parenthood. I helped my wife through four natural births, and then we adopted a fifth child, and taken together that was the most emotionally powerful experience of my life. In the European tradition, much magic springs ultimately from emotion: cursing, for example, is the power of hatred made manifest. So I mined my emotions of having and raising children, and my fears of losing them, to create a magic powerful enough to save the world.

I also tried, in a serious way, to imagine the cosmos of a medieval "cunning woman." What sort of world did they travel in, built half from Christianity and half from old pagan myths? In doing this I read about contemporary Peruvian shamans, who mix Catholicism with their own ancient myths, and other odd corners of modern life. It struck me that the Other Lands can be built from anything, can contain anything, so long as it resonates with our emotions. We find there what we need to find, or what we most fear.

I am of course disappointed that no one in the publishing world wanted to bring out my book, but I have no regrets about writing it. It has been my companion for 10 years, the repository of my imaginings, the inspiration of my dreams. In creating it I have learned things I never knew I did not know: about creation, art, inspiration, about how to stay true to a vision while shaping something others might enjoy.

I offer my heartfelt thanks to all my friends who read and commented on early drafts, who have been my companions along this journey. Without your help and support I could never have come so far.

I hope others may find some joy in my creation; I know it gives me great joy to offer it to you.

While I'd love another contemporary mystery, your description of this book intrigues me-- I occasionally read fantasy, but never the "Game of Thrones" type.

Downloaded to my Kindle, but lined up behind a number of other things, mostly historical mysteries.

What a wonderful description, both of the book and of how you came to write it! I've ordered the paper copy--still devoted to the old technology, I'm afraid. I love a nice, thick read, and I look forward to holding the weight of it.

May I ask, what did you read about Peruvian shamans?