Ashli Babbitt's Path toward the Bullet 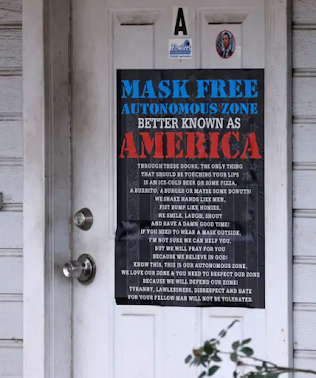 Sign on the door of Ashley Babbitt's pool business

Shelby Foote once wrote that the death of a soldier in battle happened when two paths intersected: the short, straight path of the bullet and the soldier's long, winding path through life that led him to be standing on that spot.

So let's consider the winding path of Ashli Babbitt, killed by a police bullet while storming the Capitol. How did she end up there?

For some people, their politics is just another expression of their personalities. This is certainly true for me; I am a political moderate because I strive to be moderate about everything. You can also see some of this in Ashli Babbit. She became an angry political extremist partly because she had lifelong issues with anger and a fierce certainly that she was right and others were wrong.

Ashli Babbit's long Air Force career involved a series of angry confrontations and she was reduced in rank at least once for insubordination. To her this was all about her own dedication to her comrades and refusal to bow down to authority, especially the authority of officers she thought were arbitrary or wrong.

But despite her reputation for being outspoken, she kept herself in check. Then one day, the executive officer slipped new papers into a briefing binder shortly before quizzing service members on its contents.

Babbitt asked for permission to speak freely, the former staff sergeant said, and the executive officer granted it — “which was a huge mistake for that captain.”

For the next several minutes, she “let him have it,” the former staff sergeant said. He and other members of the unit watched, riveted, as Babbitt shouted and gesticulated, warning that the officer — who far outranked her — was sapping morale. Another former airman who served with Babbitt said he also witnessed the interaction.

“She was like a dog with a bone,” the former staff sergeant said. “She could never let go of whatever her attention was on, and she was absolutely unafraid of anything.”

After she left the military her problems got worse:

The same year, [2016] Babbitt spotted her husband Aaron Babbitt’s ex, Celeste Norris, pulling out of a shopping center parking lot in southern Maryland, according to a court petition for a protective order Norris later filed. Babbitt spun her white SUV in a U-turn and began chasing Norris, according to the petition, eventually rear-ending the other woman’s car three times and forcing her to stop.

Babbitt then exited her own car “screaming at me and verbally threatening me,” wrote Norris. Norris filed a second protective order petition in early 2017, saying Babbitt had followed her home from work and called her “all hours of day and night.”

She started a pool business – a popular line for rugged individualists who want to work for themselves but don't have much capital or any special skills – but wasn't very successful and fell deeply into debt.

So she was an angry person, with a tendency to obsession and a lot of personal problems.

But that doesn't explain how she ended up storming the Capitol. People who knew her say she wasn't very political until 2016. She called herself a libertarian and was heard to praise Obama. To cover the last part of her journey we have to look away from her own life and toward other actors, especially Donald Trump.

Babbitt got onto Twitter in 2016 as a Trump supporter, posting photos of herself with her new MAGA gear and H FOR PRISON sign. It is easy to see why Babbitt and many of her personality type fell for Trump. Like them, he said what he wanted, consequences be damned. Like them, he attacked the system and mocked its authority figures.  Like them, he had zero tolerance for other people's whining. And through Trump, Babbitt entered the world of far-right paranoia.

Trump has served as a gateway to the right for many people. Trump legitimized their anxieties about decline and focused their inchoate anger on immigrants, minorities and the left. He supported their skepticism about the virus and the police state powers being used to fight it. He convinced them that the real story of America was not the one carried by the Times and CNN, but a different story about immigrant violence, elite corruption, and theft from regular, hardworking folks.

Many commenters on the Capitol riot have said that given America's long, violent history of racial and political conflict, all it took to ignite civil strife was someone like Trump to pour on rhetorical accelerant and light the match. Trump came forward at a time when many Americans were unhappy about the state of the country, worried about immigration, race change, the decline of manufacturing, foreign wars that seemed to drag on forever, and so on. His counter-narrative picked up themes launched by New Gingrich and Fox News and gave them a new vehemence. Above all, he focused those feelings on himself. The rest of the country rolled their eyes at his "only I can fix it" rhetoric, but his followers seized on it. Unable to believe in a party of an ideology, they chose to believe in a man.

Since Trump is regularly attacked in the mainstream media and his accomplishments disparaged, belief in him necessitated scorn for the public discourse. Nothing you saw in the papers or on TV could be believed, unless it supported Trump. In that frame of mind, people were open to any sort of nonsense, so long as it could be fitted into a narrative of Trump fighting the forces of corruption. Hence QAnon, and all the rest.

And thus to a rally in Washington on January 6, when thousands of people heard that they now had a chance to fight for the man they believed in against the corrupt forces ruining America. Of course they took it. They marched up the Mall and stormed the citadel of corruption, walking the paths that led Ashli Babbitt to the grave, and will lead hundreds of others to prison.

As to what path America will take, that remains to be seen.

"As to what path America will take, that remains to be seen."

Some things are almost virtually guaranteed, though.

For example, the millions of Americans who have these kinds of mental issues - extreme anger, obsessive tendencies, reflexive aversion to authority, and predilection toward paranoid delusion - will continue to go more or less wholly undiagnosed and untreated, because our profit driven healthcare system is not going to change, meaning the barriers to treatment will not come down and make it feasible for them to get help.

Similarly, the corporate media aren't going to stop giving platforms to legitimately dangerous and destructive speech until it's far too late, because outrage sells and they know they can milk such vitriol for every cent it is worth and then lamely wash their hands of it once it crosses a line, and simply repeat the process ad nauseum, feigning shock and revulsion every time while laughing all the way to the bank.