An Anglo-Saxon Charm against Stabbing Pain 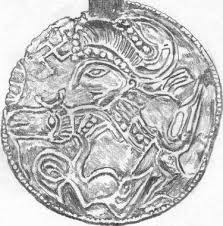 Wið færstice is an Anglo-Saxon charm recorded in a single 10th-century manuscript. The name means "against stabbing pain."

They were loud, yes, loud, when they rode over the barrow;
they were fierce when they rode across the land.
Shield yourself now, you can survive this strife.
Out, little spear, if there is one here within.
It slipped behind lime-wood, under the shield,
When those mighty women marshalled their powers
And sent screaming spears.

I will send another back,
a flying arrow swift against enemies.
Out, little spear, if it is here within.

A craftsman sat, forged a knife;
Small the weapon, yet violent the wound.
Out, little spear, if it should be here within.
Six craftsmen sat, wrought slaughter-spears.
Be out, spear, not in, spear.
If there is here within a piece of iron,
the work of witches, it must melt.


"Ese" seems to be the Old English variant of Aesir, the Norse name for their main gods. But by the tenth century "ese oððe aelfe" seems to have become a formula meaning "whatever sort of magical being."

The word translated "witch" is hægtessan, the meaning of which is disputed. In some contexts it seems to refer to a human witch, but it others it clearly refers to a supernatural being. In one passage it may mean the Fates or Norns. Our word "hag", which must descend from it, is also ambiguous, and in early modern English could refer either to a pathetic old woman or to a dangerous creature of the night. Here it seems to refer back to the "women of power" in the first stanza, riding fiercely over the land. Those night-riding women appear several times in old European lore and scholars have spilled thousands of word over them without coming to any agreement over where they came from or how people imagined them.

This and a couple of other old charms refer to removing a weapon from the sufferer's body; I wonder if practitioners "sucked out" pins or other small iron bits the way some 20th-century faith healers "sucked out" small stones or the like.

"Ese" seems to be the Old English variant of Aesir, the Norse name for their main gods. But by the tenth century "ese oððe aelfe" seems to have become a formula meaning "whatever sort of magical being."

Literally "Aesir or Elf", or less literally "God or Spirit / Fey", which pretty much would neatly encapsulate every magical being they had conceptions of.

This and a couple of other old charms refer to removing a weapon from the sufferer's body; I wonder if practitioners "sucked out" pins or other small iron bits the way some 20th-century faith healers "sucked out" small stones or the like.

I've talked to a number of anthropologists who study and/or practice sycretic medicine - the kind of person who works alongside modern day shamans, "medicine men", et cetera, among communities and cultures that still have such things. They believe in the value of modern medicine, of course, but they note that for many cultures, just as important is the capacity to settle the minds of individuals with charms and rituals. Exorcisms and the like, acts of symbolic cleansing or curing, really do help some people and can even be necessary for them to recover mentally.

The weird thing is, there appears to be some intersection with modern neurology developments. For example, one of the most reliable and effective treatments for phantom limb pains in the modern day is a wholly psychological trick - mirror therapy.

For people experiencing pain "in" their missing limbs, using a carefully positioned mirror to visually duplicate their remaining limb in place of the missing one and having them "flex" and "stretch" the phantom limb in the same way they do for their actual limb (and watching it happen in the mirror, as if it were real) has a powerful psychosomatic effect. They end up "loosening" or "relaxing" the missing limb, and the pain subsides or disappears. They know they're looking in a mirror, they know the limb they are seeing isn't real, but the subconscious brain ultimately doesn't care - the visuals matching the phantom stimulus seem to overwrite things, because the person can "see" their missing limb flex and relax, so the pain stops.

It seems obvious to me that the same sort of thing would work in the ancient world - a bit of sleight of hand, a clever optical trick, even if the patient logically KNOWS that it's an illusion, could still have a powerful therapeutic effect, one which would obviously be considered magical. And if it actually works, it's medicine.