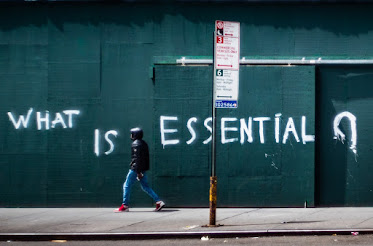 What Is Essential, photograph of New York graffiti by Russ Rowland

Luke Mogelson's first-hand account of the escalating violence among Trump's hard right supporters that culminated in the Capitol Riot, at the New Yorker.

Interesting Vox piece on Baked Alaska, aka Tim Gionet, a internet troll who seemed to believe in nothing but his own drive for fame. He ended up in the Capitol riot and now seems on his way to prison. Gizmodo once asked of him, "Is there a magic number of times people get to 'jokingly' say they’re a Nazi before we take them at their word?"

Why Sea Shanties are having a cultural moment.

Analysis by two MIT scientists says "hypersonic" weapons are being overhyped and won't really be any more dangerous or stealthy than the weapons we already have. (NY Times) Of course, the weapons we have are already plenty bad.

Dostoevsky in Love: the crazy romantic history of a man who thought only suffering gave meaning to life.

Surgery to replace aging hips, knees, etc. has gotten much better over the past decade and now results in much less post-operative pain; new robotic techniques are making it even easier. (New York Times)

Scholarly article shows, with lots of math, that French Protestants who migrated to Prussia after 1685 did materially help the Prussian textile industry. Welcoming high-skill immigrants is the one state act that has always been found to help national economies.

Russian avant-garde art from c. 1890-1925 is hugely popular and valuable, and a lot of it lost its provenance around the time of the Revolution, which is why there are so many fakes.

‘I have never written a plot-driven novel,’ Le Guin said. ‘I admire plot from a vast distance, with unenvious admiration. I don’t do it; never did it; don’t want to; can’t.’ Posted for the people who tell me they can't write because they can't think up plots.

Biden's team and its stated priorities show where the Democratic Party ended up after four years of Trump: left of Obama but right of Sanders and Warren.

QAnon supporters are sad:  "It's like being a kid and seeing the big gift under the tree thinking it is exactly what you want only to open it and find it is a lump of coal."

Sometimes it's the disease that kills you, but just as often it's your body's messed-up immune response. Including with Covid-19.

Ben Sasse on what Republicans need to do to recover from Trump and conspiracy mongering. (The Atlantic)

Every one of Trump's budgets zeroed out funding for the National Endowment for the Arts, but the agency survived and its budget even grew a little.  (New York Times) An acquaintance of mine who used to work there told me that the key to their survival has been cultivating the wives of Republican legislators. I mean, their constituents may hate the NEA, but are they going to fight with their wives over an agency that only spends $167 million a year? And will the ever increasing number of female Republicans in Congress change the equation?

It's been fascinating to watch that disillusionment with Trump unfold. I know this will sound odd coming from me, but the repeated "we've been had" and "I've had enough, guys" statements almost make me feel sorry for them.

I wonder if there will come a day when we miss Trump's relative ineffectiveness and the go-nowhere bizarreness of many of his followers. I expect Verloren will give me what-for for showing the slightest tenderness towards evil. Yes, I know many innocents have paid for these things with their lives--arguably, hundreds of thousands have. But the right isn't going away. None of these folks are going to suddenly accept liberals just because they see Q for the lie it was, or because they get a check from Biden. I have a feeling that what comes next from them may be a much rougher beast, altogether scarier, grimmer, more focused, and more determined.

For example, I feel bad for rabid dogs, because they didn't ask for their fates, but I also recognize that they are an extreme danger to everyone and everything around them, and you can't let your guard down just because you feel bad that they are suffering.

No one becomes a Fascist out of simple intrinsic malice - the malice takes hold only after they've already been infected through a process of radicalization, which only finds purchase in someone whose mind is warped and broken by a lifetime of awful influences. In the same way that people don't just wake up one day and spontaneously decide to rob a house or commit a murder, no one just wakes up a Nazi - they are built up into one over time, by others. Society failed these people.

I too almost feel sorry for them - almost, because unlike with a rabid dog, there is a line in the sand that they did eventually willingly cross; because they do on some level know exactly what they are doing, and simply have decided they don't care; because some small part of them fully understands that what they are doing is evil, and they are doing it anyway, not because a horrific virus is literally killing off their brain and causing their dying neurology to malfunction violently, but because they have chosen to embrace simple hatred and willingly seek to hurt and brutalize others for their own selfish gain.

They are deeply unhappy, utterly scared, wholly pathetic people. I pity them that.

But they are also completely untroubled by their actions and unrepentant, and will exploit any sympathy shown to them as a potential avenue of attack. Sympathy is not just wasted on them, it is actively dangerous to give to them. The desire to understand and forgive and help them be better people is not just misplaced, it is irrationality and self harm.

There comes a point where someone has simply gone too far - has crossed a point of no return, beyond which our efforts to reach them and bring them back are so unrealistic as to be insane. They can come back from that dark place, but it has to be of their own volition - and it also requires a price to be paid. It requires that they accept there must be consequences for having crossed that line, and that some things can never be forgiven, only forgotten.

Once someone reaches the point of no return, we can no longer help them to stop themselves from hurtling toward the cliff that lies beyond. Either they manage to stop themselves, or they plunge into the chasm. But past the point of no return, we can do nothing but watch and hope, while we turn our attentions elsewhere - towards people who have yet to cross that line in the sand, who we still have a realistic chance of turning away from the edge while there is still time to change course.

Triage is about saving the greatest number of lives. You only have so many resources, and some people are so far gone and would require so many resources and have so little chance of recovery that you have to accept that they are lost to you. Those resources need to spent elsewhere, on people who you can realistically save.

You are allowed your sympathy. I would be horrified if you entirely lacked it. But you can't waste time trying to save the walking dead. Pity them, but move on.

John said of the LeGuin comment, "Posted for the people who tell me they can't write because they can't think up plots."

I can't write fiction because it always sounds stilted, artificial, and boring. I can and do write analytical and informative material; I am a regular "reporter" for a local semi-monthly journal where I do "Spotlight" feature articles on businesses that take full-year advertising contracts. These are emphatically not infomercials; they're insights into business operators and business history with a few "this is what we do here" sidelights.

I don't even know that I want to write fiction; I'd much rather read it! John's mystery novel I found engaging; I'd love a sequel to read.

Have you tried applying your analytical and informative style to fictional events?

Some of the most interesting fiction (to my mind) is the stuff that takes itself wholly seriously, and merely changes the underlying premises of the setting, society, etc. Model the universe, tweak some fundamental assumptions, and then set it spinning, watch it go, and write about it as if it were actually happening.

About Le Guin: I knew it! I am reading "Always Coming Home" and just yesterday it clicked it for me: that she actually just loves worldbuilding, and aking plots is just a pretext to write about different worlds.