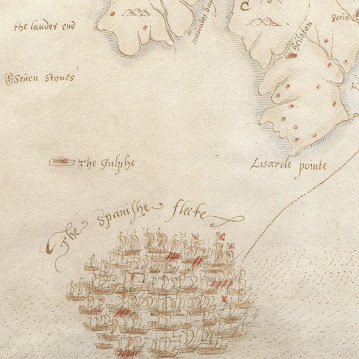 These wonderful sixteenth-century maps are in the news because they were sold to a private buyer outside Britain, but the Royal Navy Museum was able to raise £600,000 to buy them and keep them in the country. I just love these maps, drawn within a few years of the battle by someone with intimate knowledge of the events. The maps are actually very large and show the whole English channel, but I have clipped out sections to show here. You can peruse the huge, complete maps at The History Blog. 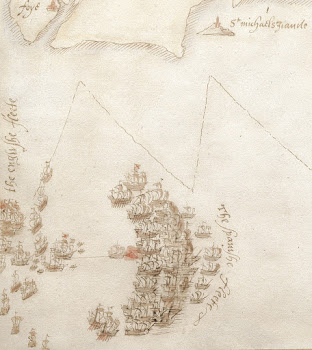 The Spanish fleet, 130 vessels, was supposed to sail to Flanders, pick up a Spanish army of 16,000 men, and transport the army to England, where it would depose Queen Elizabeth and restore Catholicism. Their goal was not to fight the English fleet, which experience had taught them was a very difficult thing to do, but avoid it or survive its attacks until the soldiers had been landed. The Armada therefore took up this crescent-shaped defensive formation, with powerful warships at the ends and in the center, the troop transports in the wings. 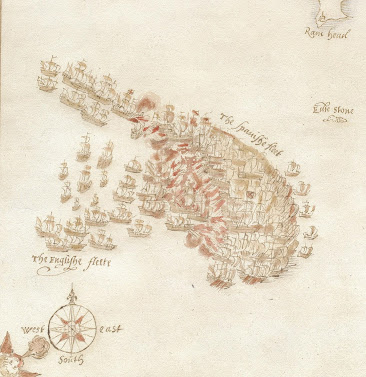 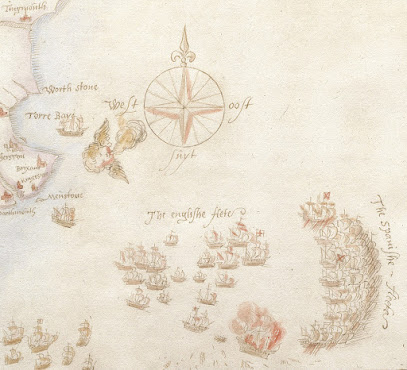 After that fight a day-long naval standoff ensued, as the Spanish sailed carefully up the channel in formation, the English nipping at their heels. Notice the wind blowing strongly from the southwest. 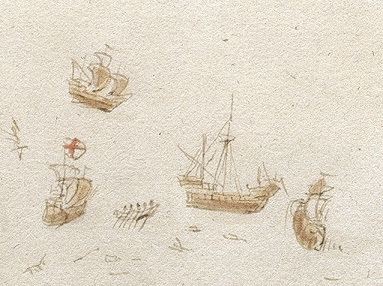 Holding that tight formation was difficult to do safely, however. Two large Spanish ships collided and were badly damaged, and they had to be left behind. This snipped shows Drake's squadron capturing one of the damaged ships, the Rosario. This turned out to be an important event because Drake discovered that the Spanish ships were so heavily laden with supplies for the army that they could not even fire many of their guns. 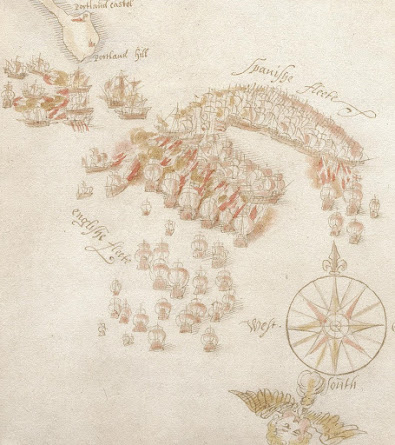 Emboldened by this knowledge, the English attacked again, sailing in much closer and doing more significant damage. The fighting was done within musket range, so less than 100 yards. But again they failed to sink any Spanish ships. 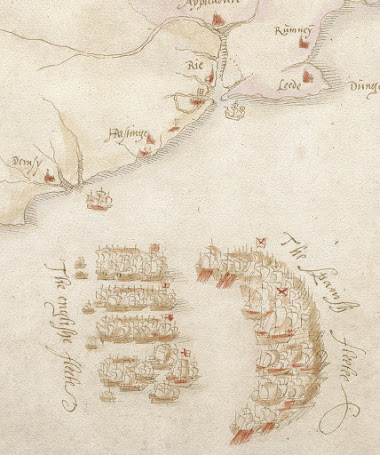 The English were unable to break the Spanish formation, and the Spaniards arrived off Calais. Once there they discovered that their army was not able to join them. There was no deep water port they could use, so they were planning to ferry the army out on barges, and in fact for half the army to cross the Channel on the barges. But the Dutch navy, using shallow draft vessels called fluytschips, had intercepted the barges and chased them back into their hiding places. So the Armada was left hanging around in the sea off Flanders, waiting for the problem of boats to be solved, which it never was. 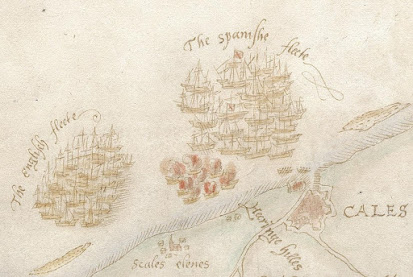 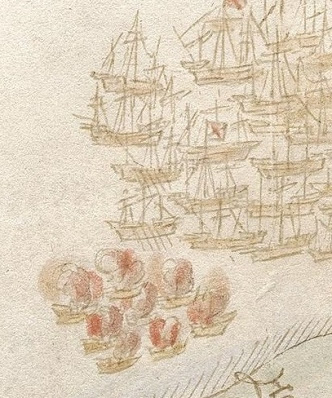 Seeing that the Armada had come to a standstill, the English launched an evening attack with eight fireships, unmanned vessels loaded with tar, pitch, and gunpowder. Some of the Spanish captains panicked and put to sea, breaking the formation of the fleet. Because of the strong southwest wind, they were unable to reform and were pushed farther east, beyond the army they were supposed to transport. 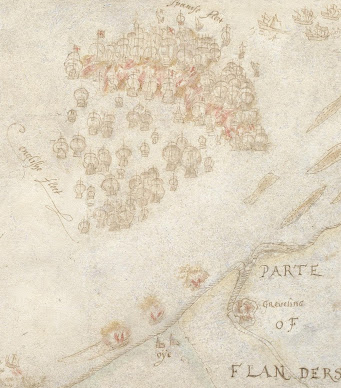 At dawn the next day the English saw that the Spanish ships were scattered, their formation broken. They pounced, sailing in among the slower Spanish ships and firing broadside after broadside until they ran out of ammunition. They finally caused significant losses to the Spanish, sinking five ships and badly damaging many more.

By the time the English broke off the engagement, the Spanish knew that they had failed. The Dutch were still keeping their barges bottled up, so they still could not reach the army. They knew the English had only sailed off to rearm, and they did not dare try to turn their fleet around and sail back southward into the wind. Their damaged, clumsy vessels would have been picked off one by one. So they decided to keep sailing north, around the north end of Scotland, down the west coast of Ireland and so back to Spain through the Atlantic. But they encountered fierce storms off Ireland and 58 vessels were lost, along with more than 5,000 men. 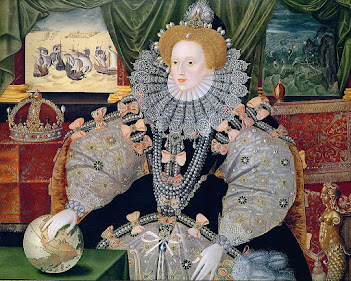 It was a terrible disaster for the Spanish and the real beginning of the English navy as a feared force on the world's oceans, plus it made Elizabeth I one of England's most beloved sovereigns and may have contributed to the remarkable creative confidence that marked England over the next generation.
Posted by John at 7:33 PM

Lets read something about the Counter Armada or the Drake–Norris Expedition, pls

I don't think this was the beginning of the English navy as a feared force. The Drake-Norris expedition was a disaster, and, like the Turks after Trafalgar, the Spanish had pretty much rebuilt their naval power within a few years. The defeat of the Armada was a blow to Spain's reputation, but England still did not count as quite a great power on the level of France or, indeed, Spain. More important, the English fleet's performance throughout most of the 17th century was neither terribly important nor terribly impressive. The lead was taken by the Dutch for most of that century. It was only in the 1690s, I think, that England became the dominant naval power.

Whoops, I meant the Turks after Lepanto.

Maybe the English were not really a powerful naval force in 1589, but I would argue that they believed they were, and thus they started doing things like settling North America, not fearing that the Spanish would drive them out. I think beliefs and attitudes like that are important.

True enough, but how the Armada events shaped English attitudes toward themselves is rather different from the sense of "a feared force," which implies that the Dutch and others spent the 17th century tremblingly telling themselves, "We can't do X because . . . the English fleet!"

I get the impression, for example from the works of J. H. Elliott, that people like Richelieu and Olivares didn't spend that much time worrying about what the English would do. The situation was different in, say, Henry VIII's time or the early years of Elizabeth, but that was before the Armada.