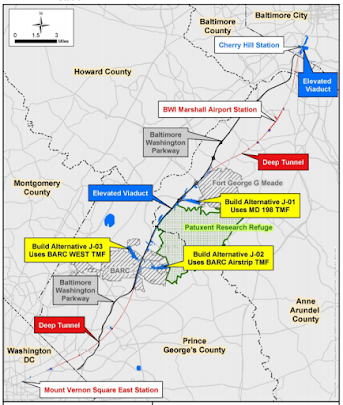 The draft environmental impact statement has just been released for the DC to Baltimore leg of a planned DC to NY Maglev train. It is supposed to run at 311 mph (500 kph) should get from Washington to Baltimore in 15 minutes, Washington to New York in an hour.  The project is being pushed by a company called Northeast Maglev, which has raised $5 billion to get started, much of that from Japan. The latest cost estimate for the first leg is actually $13.8 billion to $16.8 billion, depending on the route and some other things.

When I first heard about this scheme I was baffled; how could anyone think this could really be built? and if it could be built, how could it ever make money?

But this project is plowing ahead, as the filing if the EIS shows. I of course think this is a great idea, although I have one major complaint: it does not connect to Amtrak at either end, so it won't do as much as it might to promote train riding more generally. Right now it runs from a new station at Mount Vernon Square in DC to Camden Yards in Baltimore. I don't think it is supposed to reach Penn Station in New York, either. 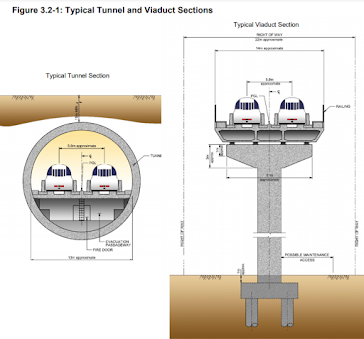 One of the big fights yet to come concerns how much of the route will be on the elevated viaduct and how much will be tunneled, because tunneling costs 10 times as much per mile.

I confess to being very much divided over both this project and the California high speed rail system. Both are staggeringly expensive and don't integrate well into other rail or subway systems, so they are not really what I would design, and I doubt either will ever either be finished or operate profitably. The route of the California system was transparently designed to get key legislators to vote for it, and frankly makes no sense. Public transit advocates keep pointing out that you could help a lot more people by investing all that money in regular bus and subway service.

On the other hand, improving local bus service fails the Daniel Burnham test:

Make no little plans; they have no magic to stir men`s blood and probably themselves will not be realized. Make big plans; aim high in hope and work, remembering that a noble, logical diagram once recorded will never die, but long after we are gone will be a living thing, asserting itself with ever- growing insistency. Remember that our sons and grandsons are going to do things that would stagger us.

The fundamental problem is that our stock and bond markets don't give a damn what actual good a company does for society, all they care about is return on investment.

If Company A delivers a 20% return on investment from providing something of value to society, but Company B delivers a 50% return on investment from selling something that actively hurts society, investors are going to flock to Company B over Company A. "Wait, I can make twice as much money investing there instead? Why would I put my money anywhere else?"

Our reliance on private industry to provide needed public infrastructure is insane. We spend trillions of dollars in taxes on senseless warfare, and then when someone points out "We could really use some high speed rail lines here and there..." we depend on private corporations and greed-driven investors to fund and create it. It's the same mentality that gives our country such an awful healthcare system, where treatment is incredibly poor quality compared to most developed countries while the prices are insanely high by the same point of comparison.

And even when we don't rely on the private sector, we get nonsense like you mentioned in California where pork barrel tactics and blatant political manipulation happen, because instead of just setting aside money for projects that serve the public's needs from the get go, we instead rely on a system where that money has to be specially requested and approved through a political gameplaying process.

We need to seriously rethink how we do things. We need to take a meaningful amount of tax money and set it aside for needed infrastructure, and get the best experts involved in a non-partisan organization whose sole mission is to investigate how those funds can best be used and oversee how they actually get spent. Or something!