Not Excited about Life on Venus 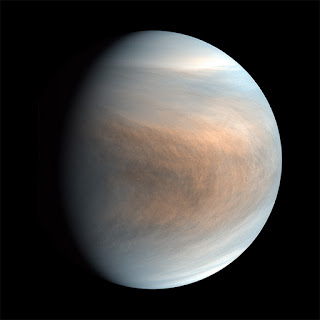 Lots of buzz in the news this week about two scientific papers arguing there must be life on Venus. They base their conclusion on the discovery of phosphine (PH3) in the Venusian clouds. Which I admit is pretty cool. Phosphine seems to be a byproduct of respiration among some bacteria, so it might be a sign of life. These scientists go on to say that no known inorganic process could produce it outside the titanic pressures of Jupiter's inner atmosphere, so there must be life  on Venus.

Maybe. But since we understand Venus' strange atmosphere only a little, and its conditions are very difficult to replicate on earth, who knows? Claims that methane and oxygen found on Mars are evidence of Martian life have not exactly panned out, and incidentally nobody knows what made those gases, either.

I despise scientific arguments that go, "I can't think of any other explanation, so it must be alien life." For one thing we still don't even understand how or why bacteria on Earth produce phosphine, so it might turn out to be a fairly simple reaction,

I support dreaming up some way to study the Venusian clouds and sending a spacecraft to do it, but I am not optimistic that it will find life. I don't think we understand nearly enough about the universe for this sort of leaping to conclusions.

I think scientists are just applying Occam´s Razor principle. And a fairly simple reaction, as you say, could create very primitive forms of life. Neither optimist nor pessimist, I am just expectant, we do need some exciting good news. In a century we probably need an extra planet for safety.