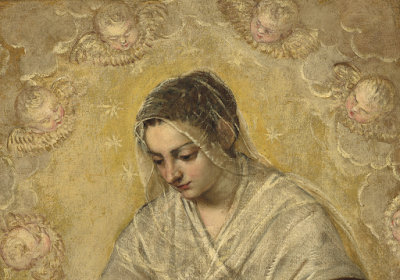 Madonna of the Stars by Jacopo Tintoretto, detail
Inventors who later lament their creations; did you know the woman who launched the campaign for Mother's Day was later arrested for violently protesting its commercial excess? Other lamenters include the inventors of the K-cup and the office cube.
The delightful Hackney Mosaic Project. And here.
Video of Thai farmers herding hundreds of ducks.
The Weirdness of Jonathan Strange and Mr. Norrell.
Kenan Malik takes on the notion of "white privilege." Because, he says, poor white people in the US have no privilege that protects them from incarceration or police violence, and in fact they experience both at about the same rate as black people.
Hummingbird torpor.
Eighty-four online-only, open-access (OA) journals in the sciences, and nearly 100 more in the social sciences and humanities, have disappeared from the internet over the past 2 decades as publishers stopped maintaining them.
Huge art installation "inspired by the elaborate courtship rituals of bowerbirds."
New California law undoes the rules that kept inmate firefighters from immediately becoming professional firefighters upon release, which I wrote about here.
Does the COVID-19 virus kill via a bradykinin cascade?
The name Karen is rapidly dropping in popularity. (The most common female baby name in the US last year was Olivia.)
Dark matter gets even weirder.
Posted by John at 7:15 AM

"Either there is a missing ingredient in the simulations or we have made a fundamental incorrect assumption about the nature of dark matter,"

You mean the thing that we dreamed up as a means for explaining why our models of the universe predicted X amount of matter and energy, while actual observation could only account for a tiny fraction of that amount?

Hmm, I know it sounds crazy, but maybe... just mayyybeee... our models are wrong, and have been since we first postulate the idea of "dark matter" to fix them?

I know that's "unscientific" of me to suggest and all, but I dunno... call me a radical, but I think when your predictions suggest the universe should have 5 times the mass you're actually able to detect, you might have a problem with your ability to make observations, your ability to model the universe, or even both.

Crazy, I know! But sometimes when the numbers don't add up, you need to rethink your assumptions, on the off-chance that your fundamental assumptions aren't quite right.