Camille Flammarion: the Scientist who Wanted to Believe 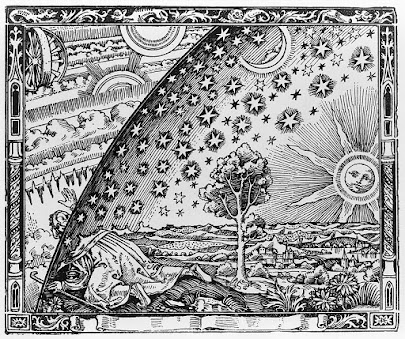 If you ever wondered where this image came from, I can tell you: it's from an 1888 book called  L’atmosphère: météorologie populaire  by a French astronomer named Nicolas Camille Flammarion (1842-1925). The name of the artist is unrecorded, but Flammarion designed all the illustrations in his books, so I think we can consider him at least the co-creator. It represents, I think, his understanding of science as a way to see beyond the limits of our little world to the unimagined wonders just over the horizon.

Flammarion was a fascinating character, a scientist who straddled its boundaries in two directions. He was a great popularizer, author of many books and articles for a mass audience and for a while the publisher of a science magazine for the masses. He was also very interested in spiritualism, ghosts, and the like, which led eventually to his being more or less banned from serious scientific circles. 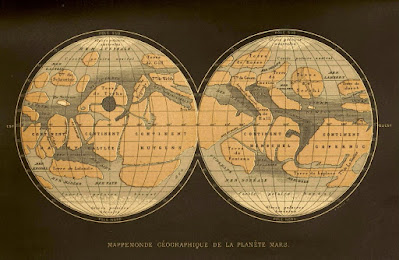 Flammarion's first famous book was published in 1862, when he was only 20. La Pluralité des Mondes Habitées (The Plurality of Habitable Worlds) considered which of the other planets might be inhabited, which intrigued Europeans of the day enough to sell a lot of copies. This launched Flammarion on his career and also made him the century's most famous explorer of the idea of aliens. He later wrote two more books on the same theme and also a novel told from the point of view of a living comet. It has to be said that while Flammarion had a lot of ideas, as a writer he was no match for his countryman Jules Verne. 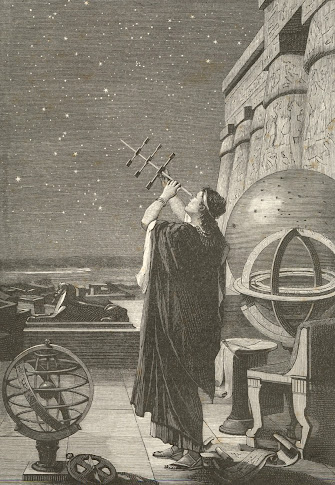 Like many people of his time, Flammarion was fascinated by psychic phenomena and spiritual mediums. He wanted, it seems, to find scientific proof of spirits and the afterlife. He wanted to believe. But he found, like many of his own time and since, that without some kind of scientific evidence he simply could not. He wrote:

It is by the scientific method alone that we may make progress in the search for truth. Religious belief must not take the place of impartial analysis. We must be constantly on our guard against illusions. 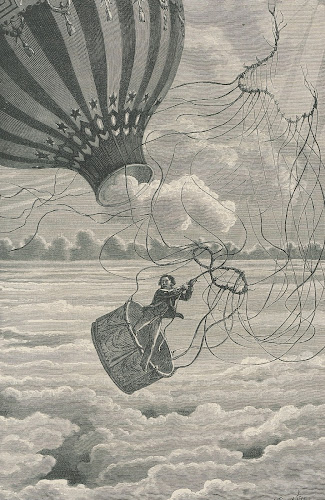 He carried out study after study of ghosts, séances, telepathy, and more. He made a two-year long study of automatic writing, which many thought was dictated by spirits. After working with a dozen of the most famous practitioners in Europe he concluded, "the subconscious mind is the explanation and there is no evidence for the spirit hypothesis." After years of studying mediums he complained, "It is infinitely to be regretted that we cannot trust the loyalty of mediums. They almost always cheat."

Over the years he accumulated many cases of phenomena that he thought could not be explained materially, and he argued that science ought to take this seriously. But he was never able to convince himself that these random anomalies proved the existence of spirits or life after death:

This is very far from being demonstrated. The innumerable observations which I have collected during more than forty years all prove to me the contrary. No satisfactory identification has been made. The communications obtained have always seemed to proceed from the mentality of the group, or when they are heterogeneous, from spirits of an incomprehensible nature. The being evoked soon vanishes when one insists on pushing him to the wall and having the heart out of his mystery. That souls survive the destruction of the body I have not the shadow of a doubt. But that they manifest themselves by the processes employed in séances the experimental method has not yet given us absolute proof. I add that this hypothesis is not at all likely. If the souls of the dead are about us, upon our planet, the invisible population would increase at the rate of 100,000 a day, about 36 millions a year, 3 billions 620 millions in a century, 36 billions in ten centuries, etc.—unless we admit re-incarnations upon the earth itself. How many times do apparitions or manifestations occur? When illusions, auto-suggestions, hallucinations are eliminated what remains? Scarcely anything. Such an exceptional rarity as this pleads against the reality of apparitions. 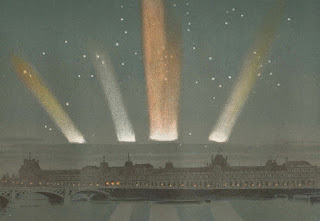 Flammarion dreamed of wonderful worlds: of planets populated by alien beings, of planes filled with spirits, of secret knowledge that would be revealed by some combination of scientific rigor and spiritual practice. He never found them, but to some extent he did imagine them, and through his stories and the engravings he commissioned he shared those visions with the rest of us.
Posted by John at 9:17 PM

A remarquable enyclopedist of the Industrial Age, Flammarion. He was best known as Camille, by the way. He lived in years of great enthusiasm for science, knowledge, research and exploration of new horizons, nothing like now. In comparison, we live dark neo-medieval times.

"That souls survive the destruction of the body I have not the shadow of a doubt." Well, there was his great great mistake. Beliefs misleaded him, that happens to the best. It's sad and frustrating, anyway, how often prejudices of all kinds lead to wrong assumptions.

I can identify with Flammarion and his quest, even if, sadly, I can't share his certainty about soul's immortality. One heartening thing about him is that he is a fine example of the fact that not everyone just finds whatever they set out looking for. He set out looking for something, he looked hard and long, and he admitted he did not find it.

Fascinating! A true rationalist in many ways even if he *hopes* for something non-rational :)

When I first saw the name, of course, I instantly thought of Nicholas Flamel, however.