Shimao and the Origins of Chinese Civilization 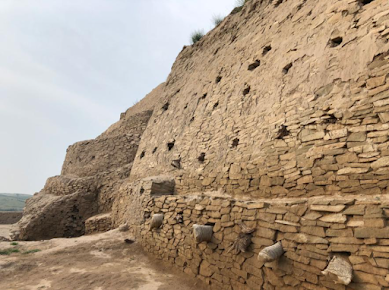 Shimao is a major archaeological site in northern China, at the edge of the Ordo desert. Its impressive walls were long thought by locals to be part of the Great Wall, which does run nearby.
. 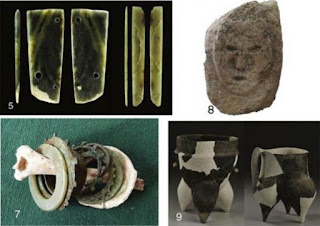 But people poking around the ruins found artifacts that seemed out of place for a remote medieval fortress, including implements made of Jade from a thousand miles away.
So a serious archaeological investigation was eventually carried out. The site turned out to be, not a border fortress of empire, but a much older settlement, a fortified town dating to around 2,300 BC. This is the largest settlement yet found in China from such an early date, and it is on the far edge of the Chinese culture area. Is that significant? Certainly it adds to the argument that Chinese civilization did not just spread outward from one small center in the central Yellow River Valley, but from an early date had branches in the south, on the coast, and inland at the edge of the desert. The great size and wealth of Shimao may also indicate that trade and other relations with the steppes, so important in historical China, were important in this early period as well. 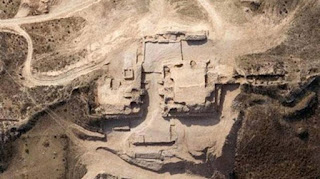 The center of Shimao was an immense platform topped by a pyramid 230 feet tall, with 6 miles (10 km) of walls. The population is estimated as at least 10,000. The center of the site is a citadel or palace complex covering 20 acres (8 ha), with its own cistern and craft areas.
The site seems to have been abandoned around 1800 BC, possibly because the climate entered a dry phase. 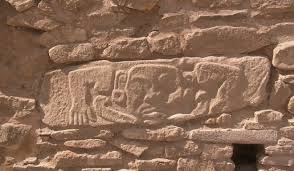 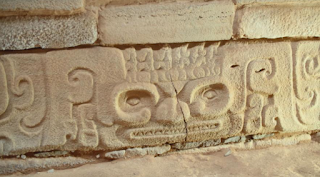 About 70 of these strange relief carvings have been found, mostly within the palace. 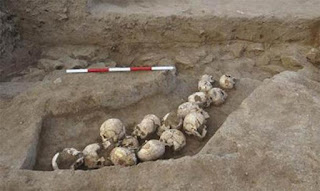 The most spectacular discover was six pits containing 80 skulls placed at the corners of key structures and almost certainly human sacrifices. Two pits on either side of the main gain each contained 24 skulls, all of them teenage girls.
Again I marvel at the things Shimao shares with late Neolithic sites around the world: massive defensive walls, monumental sculpture, temples atop pyramids, and the bizarre habit of setting the foundations of great buildings atop the bodies of sacrificial victims.
More at National Geographic.
Posted by John at 6:57 PM

The reliefs look so... Olmec?