Horseradish, or, How Boring was Medieval Food? 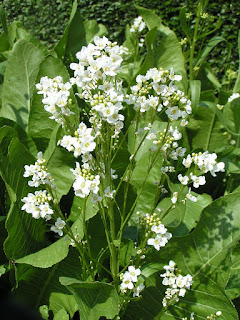 Most accounts of the food Europeans ate before 1600 make it sound pretty dismal: bread, boiled meat, more bread, roasted meat, more bread, or maybe porridge. I have always puzzled a little over the contradictions embodied in the lives of, say, Irish kings: an amazing tradition of myth and story, poetry at the highest level, fabulous golden jewelry, but on the other hand no chimneys or windows and not much to eat but meat and bread. No wonder they cared so much about the ancestry; what else did they have? And this, maybe, is why their descendants were willing to pay so much for pepper or cinnamon, and why the Romans put so much effort into making their ghastly-sounding fish sauce.

So I have been wondering about the ways Europeans did have of making their food more interesting. Some are pretty obvious: salt, onions, garlic, honey, cooking in wine or beer. And butter, one of the great blessings of a dairying culture. There are also the standard European herbs, you know, parsley, sage, rosemary, and thyme. Weirdly there is not much evidence that anybody used these in cooking –rosemary, for example, appears in old books mostly as medicine, and because the ancient Egyptians used it in preserving mummies – but how can they not have?

Part of the problem is that most of our written sources deal with elites, and when they describe food it is usually to show how expensive it was, or how much manly hunting went into procuring it. So herbs that grow free around the doorstep would not have rated mention.

A few other thoughts about how ancient folks made their food interesting:

Mint. Grows wild all over northern Europe so was practically free, and was I suspect used to flavor many dishes of the non-rich.

Capers. These are the pickled buds of a bush that grows wild all around the Mediterranean. The history of their use is obscure, but charred specimens have been found on Iron Age archaeological sites. Today's wild plants seem to be hybrids of different ancient species, maybe crossbred with domesticated varieties, anyway such a mess that modern biologists can't sort it out, which bespeaks a long history of human use. These can stand in for a variety of pickled things that may have been used as flavoring, from raspberries to spruce needles.

Mushrooms. Especially in central and eastern Europe, gathering wild mushrooms was a traditional pastime, and I think they flavored many soups etc. But really there is next to no textual evidence until the Renaissance.

Mustard. This Middle Eastern herb spread to northern Europe with the first farmers, and mustard sauce was one of the standard fancy foods in the north. Viking feasts often included eggs in mustard sauce, more or less what we would call deviled eggs.

Horseradish. This just occurred to me today, which is how I ended up writing this post.  I thought it was Chinese, but it actually comes from the Balkans and Turkey and was well known in the Classical world. According to some ancient encyclopedia writer, the Delphic Oracle once told somebody that horseradish is worth more than gold. (What do you suppose his question was? Should I go to war? Should I invest all my money in ships? Should I marry the heiress? Answer: Horseradish is worth more than gold.) Anyway this set me thinking that "hot" spices were not a complete novelty to Europeans, since horseradish triggers the same heat sensitive cells on the tongue as capsaicin.

The histories I read of European agriculture, starting when I was a teenager and continuing through graduate school, were all about the major crops: wheat, barley, peas, olives, grapes. You would never guess, from that sort of book, that pioneering Neolithic farmers carried along mustard seeds as well as wheat, or that horseradish was an important commodity. Or how about the interesting fact that our pears are hybrids of varieties from western Asia and China, mingled nobody knows how? Peasants lived as closely with plants as they did with animals, and they surely had a vast lore about them. For reasons of class and so on, the parts of that lore that got written down were about medicine. But if you look hard there is a lot of evidence that the trading, raising, and breeding of plants, and experimenting with their uses, must have been widespread and deeply entrenched.