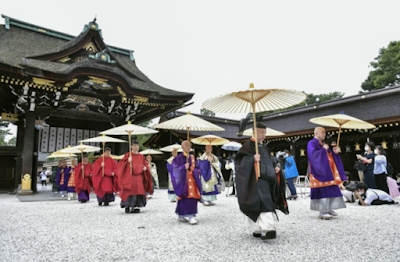 A well-known shrine in Kyoto held a Shinto-Buddhist rite originating in the 10th century on Friday after a 550-year hiatus, as part of its efforts to revive ancient rituals. The Kitano Tenmangu shrine, founded in 947, said it had not held the Kitano Goryoe rite since 1467, when the Onin War, an 11-year-long civil war, broke out.

The rite was originally to appease the anger of the spirit of Sugawara no Michizane (845-903), a scholar and politician enshrined as a god at Kitano Tenmangu, as people in ancient Japan believed that natural disasters and epidemics were caused by the curse of well-known figures who were tragically killed or died with feelings of resentment.

On Friday, shrine priests performed the rite jointly with priests from the Enryakuji temple in Otsu, Shiga Prefecture, as the Goryoe rite had been held in a syncretism of Shinto and Buddhism. In addition to praying for the repose of Michizane's spirit, the priests prayed for an end to the coronavirus pandemic and people's good health and safety, according to the shrine.

Here's a new ambition for all you scholars out there: for your ghost to be so feared that someone dreams up a ritual to appease it.