Capitals from the Former Abbey of St. Martin in Saujon, France 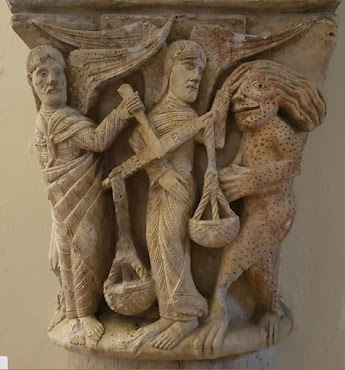 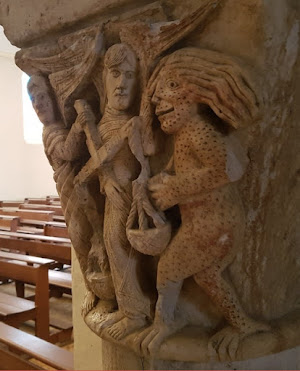 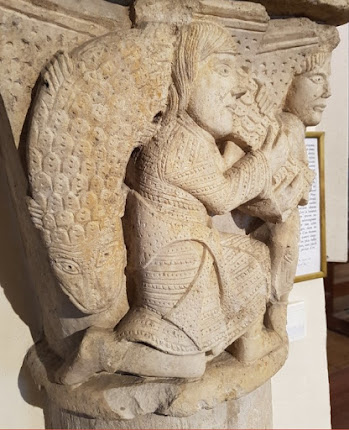 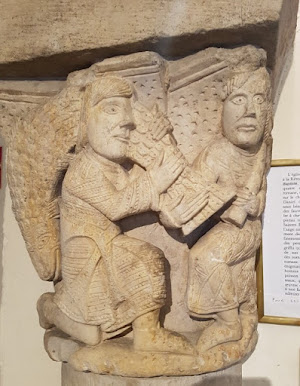 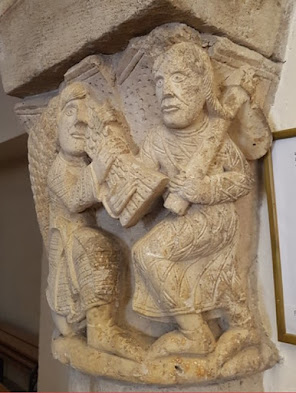 Anybody know who the guy with the huge fish is?
Posted by John at 9:49 PM

"Anybody know who the guy with the huge fish is?"

Did some digging. Took a bit of work, but I'm confident I found it. And it seems I might actually be the first person to actually figure it out!

In a couple of the images, there's an informative paper "sign" partially visible. I dug around to find the photoset these came from, and within it I found a better picture of the sign and then ran it through an automatic translation website (the wonders of modern technology!), and while it didn't pick up on all the text, I can piece together what it missed for a rough translation.

First up, verifying the abbey in question. As seems typical with religious sites, there are lots of totally unrelated places called The Abbey of St Martin, and I wanted to narrow down which one this actually is, to get proper context clues to work from.

According to the translated text, the site in question is "L'église romane Saint-Martin a disparu à la Révolution", or... "The Romanesque church of Saint Martin that disappeared to the Revolution". Not the "abbaye" or abbey of Saint Martin. So that was one bit of confusion to note.

In the same set of photos on Flickr, however, there's a photo of a separate sign which refers to "Le Prieuré Saint-Martin", or the priory of Saint-Martin. And googling specifically for that leads to a wikipedia article for "Saint-Martin-des-Champs Priory", which was located in Paris, and was reported suppressed in 1790 as part of the Revolution, being turned into a prison. So that element fits with the above.

This clears up the whole "Saujon, France" angle - that's the location of the church where the capitals are housed, not where they are from. (And prusumably where they were found? The phrasing is unclear - I think what they're implying is that someone took the capitals from the abbey in Paris after it was closed, moved them to the church in Saujon, and then buried them in the local fairground for some reason?

This also clears up which particular "Saint Martin" we're talking about, because again, in these sorts of religious matters there's rarely just the one. I had already suspected it would probably be Martin of Tours, as I didn't immediately find other "Saint Martins" who were specifically French, but that suspicion was confirmed by sources stating the Saint-Martin-des-Champs Priory's oldest building was a chapel dedicated to Martin of Tours.

On to the descriptions of the capitals themselves.

The first is said to be of Daniel in the lion's den. The second is said to be of the female disciples (sometimes called The Three Marys) who spoke to the angel at Jesus' tomb after his resurrection.

The third is said to be of "le Pèsement des Ames", the "Weighing of Souls"... which differs from the theme of the prior two, in that it isn't a scene from the Gospels themselves, but is more of a generalized Christian concept. (It's unclear if this is supposed to be The Last Judgement, or an example of Particular Judgement.)

'The last presents an enigmatic scene: figures, including one man who bends under the weight of a huge fish he carries.'

So it seems the signmakers are just as baffled as you are. And it's here where we begin to have to puzzle out possibilities from broader context clues.

Now, my first impulse at the very start was to consider Jonah and The Whale, since... well... arguably the original story doesn't really talk about a "whale", but a very large fish. But there's no part of that story that involves Jonah or anyone else carrying the fish - Jonah just gets spit up on dry land, and we never hear about the "whale" again.

Still, I wasn't entirely sure that was a dead end. There's traditionally a perceived connection between Jonah and The Whale and the Resurrection of Jesus, both spending three days confined in "death" before miraculously escaping - and given that the resurrection is one of the other scenes depicted on the columns, well...

It also certainly doesn't hurt that Jonah is sometimes referenced in depictions of the Last Judgement, which is (seemingly) yet another of the scenes depicted...

But what are some other options?

Well, there's Leviathan, for one - where there's again a curious connection to The Last Judgement. Apparently in Christian traditions, Leviathan became associated with the visual motif of the "Hellmouth", a gaping maw of a terrible beast which would swallow the damned at the Last Judgement, transporting them to hell. The thematic similarity to Jonah and the Whale would have strengthened that association.

That seemed to be moving in the wrong direction, though. My next step was to examine the pictures of capital itself for context within the art. Nothing jumped out at me - there's the figure carrying the massive fish, and there's a second figure carrying what appears to be an adze. Not much to go on.

But what about still other angles? Maybe something more local? Regional folktales or legends, perhaps - or maybe a story about Saint Martin?

A brief look into Martin didn't turn up any obvious connections. He's associated with a bunch of things, but not fish. But maybe the connection wasn't Martin himself.

I went back to the topic of the priory itself in Paris, and read that in 1079 it was given to Hugh of Cluny, and became a Benedictine community. Could that be something?

On a whim, I looked to see if Hugh had any connections to fish.

No dice on my first search attempt - I got a modern day company called Cluny Fish, purporting to have "Finest Scottish smoked salmon, and seafood's from the wild seas around Scotland." But I tried again with some boolean refinements, and...

Now, Majolus preceded Hugh of Cluny by more than a century. He was abbot of Cluny Abbey, which is not anywhere near Paris, but in Cluny, Saône-et-Loire.

Hugh of Cluny would later be the sixth Abbot of Cluny, and the Saint-Martin-des-Champs Priory in Paris which he was given was not his primary holding, but became part of the "Congregation of Cluny" and the broader Benedictine community.

Now, Majolus (or Maiolus) was a celebrated figure, and a number of miracles are attributed to him, including the usual healing of the sick and whatnot. But one in particular stands out considerably:

Once returning from Aquitaine, he decided to pay a visit to a monastery, first sending a messenger to say he was coming. The monks rejoiced, but the purveyor was in despair, because for long he had been short of fish. However, he told the fishers to go down to the river and to call on the name of Maiolus. This they did, and to their joyful amazement caught an enormous salmon, a fish never before found in that
river."

That seems overwhelmingly likely to be the exact answer to our mystery - art at a priory controlled by the later Abbots of Cluny, depicting a miracle said to have been worked by one of their famous predecessors.

Impressive. I did read the signs, as unhelpful as you say.

Out of curiosity, do you read or speak French?

I'm not remotely fluent, and so had to rely on translation tools, cognates, and good old fashioned dictionary work to verify, and am deeply grateful for modern software speeding up the process considerably.

I ask specifically because I decided to reach out to the church privately, to share my conclusions and see what they make of them. I did some sleuthing and translating, and sent an email out in what I hope is in not-too-badly-broken French asking them to refer me to someone who might be able to correspond with me in English for. If you are more fluent than I am, and if you are interested, it might be a boon to have some help in communicating across the language barrier.