A Thought about Cities 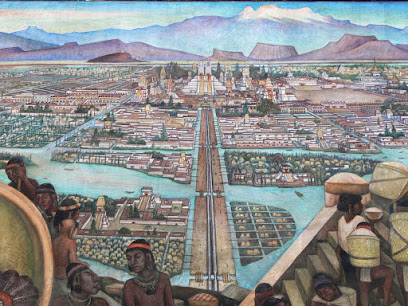 From The Life and Death of Ancient Cities by Greg Woolf:

If we could trace a family tree for all the world's cities back to one single moment of invention, we could begin our story from there. In reality urbanism had many origins. Cities have been invented again and again. They were created in the river valleys of Egypt and Mesopotamia and northern China, in the High Andes of the Inca, and on the Anatolian plateau by Hittites and their neighbours. The Maya built cities in what are now the forests of the Yucatan peninsula and traded with urban populations in southeast Mexico. There were cities in ancient Thailand, and south of the Sahara. There were cities in woodland America long before the arrival of Europeans, and perhaps even in the Amazon basin. . . .

When people crossed Beringia to the New World,

urban life was completely outside their experience and beyond their imagination. There had been no cities anywhere on the planet when their ancestors left Eurasia. The flooding of Beringia meant that their descendants had virtually no contact with non-American populations until the arrival of Europeans some five hundred years ago. Yet within a few thousand years of arriving in the continent early Americans had created a number of urban cultures, each one different from all the others in detail, yet all spookily similar to those being created around the same time by fantastically distant cousins across Eurasia and North Africa. When the conquistadores in Peru encountered the great Inca city of Cuzco they could immediately recognize temples and palaces, avenues and piazzas, great monuments and humble dwellings just like those they had known at home.

Of course Europeans who reach Mexico also recognized kings, nobles, armies, army officers, religious processions, sacrifice, merchants, leagues of smaller states united against a single larger foe, market districts divided into streets each dominated by a single trade, clothing distinctions that indicated social rank, and many other things. Much about our lives seems to be determined by the basic technology of our times, and therefore to appear around the world in every society that reaches that stage of development.

Is it really about technology? It seems to me there are deeper, human psychological and social dynamics at work. Hierarchy, religion, family, the mentality of sacrifice, and most of the rest you cite seem to me to be human universals (mutatis mutandis). The local variations also reflect human psychological and social dynamics, in combination with and in reaction to a host of factors. But I'm skeptical about arguments that sound like technological or environmental or similar determinisms.

Cities aren't really all that distinct from towns, villages, or even migratory camps. They're just larger, with more complexity and specialization.

If you have human-made shelter, whether mobile or fixed in place, you also develop systems for arranging buildings based on usage, following practical need.

Temples are defined by their geometry - they are sacred places, and they are designed to convey their sacredness in obvious visual and spatial terms. A temple in a city is little different than a ritual space in a nomadic camp - it's likely to be large to accommodate people; tall to be conspicuous and imposing; walled off or otherwise separated from surrounding spaces to control access; full of art and artifacts that required obvious effort or cost to create; etc.

Everything that gives rise to cities was already present in pre-urban human cultures of every kind, just in smaller and simpler forms. You don't really invent cities - you just make camps and settlements bigger and non-mobile.

It's certainly not about technology; more a cultural and civilizational stadium that has to do with History and dimension. In America, during the rush to west, wooden towns around the Bank and the Casino/Bar existed at the same time as Indian camps (some very large) of a very different pattern, as well as concrete cities of chequered design already by the coast. You had three contemporary settlement models in the US, two of them based on walking and horse mounting. But slowly a unique common model proved to be efficient for a larger population, that´s what you have.