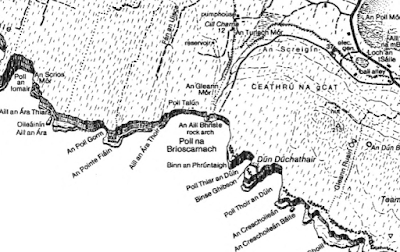 Tim Robinson’s 1986 book about Aran has been perfect for me in this crazy time: calm, soothing, richly interesting, rather sad but in a slow, reflective, elegiac way. Aran is the largest of three limestone islands off Ireland’s west coast, long fabled as the most unspoiled bit of old Erin. When Robinson, an English writer, arrived at Aran in 1972 the place was already becoming what it is today, a tourist spot for those who really want to get away from it all. But Robinson spoke Irish and had a knack for getting old men to talk to him, so he was able to record a hoard of stories about Aran’s past that delightfully enriches his account of walking the island’s stony shores.

Robinson actually wrote two books about Aran, of which Pilgrimage is the first. Pilgrimage traces the circumference of the island, an imagined walk all the way around its shores. Labyrinth, the second volume, explores the interior, and since I’ve already ordered it I imagine I’ll be reviewing it later. Aran (or Inishmore, as it is called by people who apply the name Aran to the whole island chain) is a long, narrow island with essentially two sides. The southern side faces the Atlantic and is exposed to its fearful storms; nobody lives there, and much of the coast is daunting cliffs as much as 300 feet (90 m) tall. Everyone lives on the northern, protected side where the coast is a series of bays, headlands, and shingle beaches. So the book is divided into two parts, one that describes the unpeopled cliffs and the other the harbors and seaweed beds of the settled side. 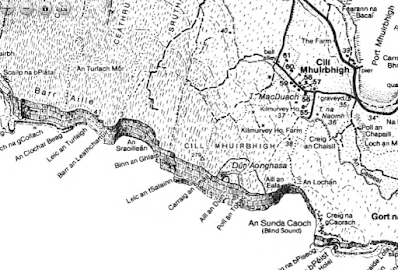 As Robinson walks his readers around the island he tells us about the geology of this limestone rock, and then the names of each feature, and then the stories behind the names. Every few hundred yards he has a longer story about some particular bay, cliff, or beach, or some fascinating bit of island history. He starts at the east end of the island and almost immediately we get this:

In the last century emigrant ships sailing out of Galway for America used to come through Sunda Ghriora [the strait east of Aran] and sometimes had to wait for days for a favourable wind. Then if there were Aran people on board their relatives and friends who had already said goodbye to them and may even have held a wake for them, knowing that in most cases the parting was forever, were given another sight of them by this chance that was perhaps more cruel than kind, but at a distance that must have made it an unreal, wordless and ghostly reappearance. The way by which the bereaved came down to the shore to wave and weep is a little valley called Gleann na nDeor. This phrase is the Irish equivalent of the old preachers’ platitude for this world as a place of sorrow, the “vale of tears.” (33)

Then around to the southern shore of the island and the great cliffs. As Robinson writes, an ordinary map all but ignores a cliff, making it a mere line between land and sea, but the cliffs of Aran have their own geography, and their own history, too. The cliff face “was a wide province of the islanders’ mental landscape, a theatre of anecdote, tradition, boast and dream ” (63). 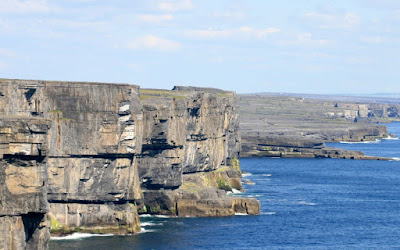 These cliffs have ledges in them, because the thick layers of limestone that make them up are separated by thin layers of softer clay-stone that erode more quickly, creating slots in the cliff face. In late spring those ledges are covered with seabird nests, which the locals used to raid for feathers, eggs, and meat. This was done by lowering the "cliff man" 100 or 200 feet down on a dodgy rope – in the dark, because the nests had to be raided at night – until he found the ledge. He would then crawl along the ledge feeling for nests, trying to catch the birds sleeping and strangle them before they could cry out and warn the others. The birds and eggs were stuffed into sacks, and when the cliff man could carry no more he would tug on the rope and be pulled up. Nobody knows how old this practice was, but it was first recorded by outsiders in the famine years, and it died out during World War II. The cliff men were local heroes, and in the 1970s people still remembered the most famous ones well and knew many stories about their heroics and their phlegmatic attitude toward danger.

Some of the bays along this shore have names related to wrecking, like Bay of the Timber or Bay of the Pine Boards:

Many of the old homes of the islands have rafters cut from beams washed ashore and carried off and hidden before the coastguards or the landlords’ agent got wind of them, and even today islanders keep an eye out for such prizes. Recently an elderly and, as I had thought, frail couple, neighbours of ours in the west of the island, managed to drag a thick tree trunk eighteen feet long up a steep shingle bank to where they could bring a cart for it. When I made some remark about this feat the old lady replied, “Ni raibh ann ach pleisiur!” — “It was nothing but a pleasure!” (40) 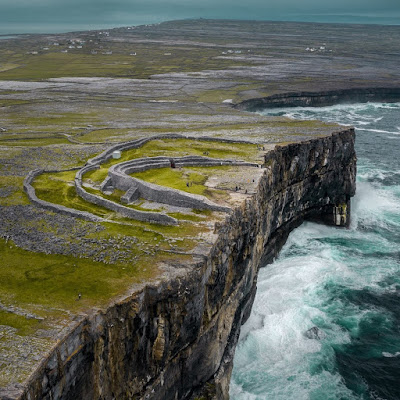 The most famous feature of Aran’s coast is the great fort known as Dun Oengus. Alas, nobody really knows how old this is, who lived here, or why it was built, and Robinson makes even the tentative dates and theories I have seen elsewhere seem like pure guesswork. Robinson does dismiss the notion that the fort was once round but lost half its structure to the sea; such a great fall of rock, he says, would still be piled around the base of the cliff, since it would have taken 10,000 years for the waves to wash it away, and since there is no such pile there has been no major collapse of this cliff since the Ice Age. Besides there are two other forts in these islands that back up against the sea, although both of the others are on peninsulas. Robinson fills out his chapter on the fort by regaling the reader with all the theories that have been advanced by every sort of historian and madman over the years, especially those concerning the Fir Bolgs. The traditional history of Ireland, as written down by medieval monks, tells of a series of invasions by people who each displaced the previous inhabitants. The Irish, ancestors of the current inhabitants, appear in this narrative as the Milesians, and the people they drove out were called the Fir Bolgs. Nineteenth-century antiquarians decided that Aran must have been the last refuge of the Fir Bolgs, and Dun Oengus their last stronghold, their backs up against the cliffs of the sea.

I could go on and on, but I have to limit myself, so as to leave you reasons to pick up this book yourself. So we go around the island to the north, inhabited side. 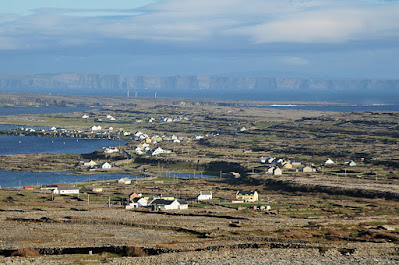 Aran's economy, such as it was, depended on three things: fishing, raising potatoes in soil made out of sand and seaweed, and kelping. Kelping meant the gathering of seaweed to burn for the ash, which lasted on Aran from the early 1700s to 1948. Kelp ash was a valuable commodity as a feed stock for Britain's developing chemical industry, which consumed thousands of tons of ash every year for making soap, gunpower, and a hundred other things. Kelping therefore became a major industry on all of Britain's rocky shores but especially in the Scottish highlands and the west of Ireland.

Fishing and nest raiding were both masculine pursuits, but kelping was done by whole families, so it was a big part of the Aran experience. It was backbreaking labor, cutting the seaweed in waist deep water, carrying it up to the shore, a race because it could only be done at low tide three or four days a month. Then it had to dry, and rain at the wrong time could ruin it. Then it was burned in hand-built rock kilns, a process that took 36 hours of constant tending. Then it was sold to an agent who tested it for its iodine content and, the islanders thought, regularly cheated them. Robinson passes on a little rhyme sung for him by an old woman, which he translates; the place names are all rocky points where kelp was gathered and burned:

Dun an Ni broke my heart;
Beal a Chalaidh took my life;
Leic Mhor put me under the earth.

Now all of that is over, and the locals live half off subsidies and half off tourists; not that they don't still fish and raise potatoes in gardens they build out of sand and seaweed, but that is no longer the economic center. They have health care, and schools, and they don't have to worry about starving. And they are mostly just like everyone else.

If you want to get away from our sad and crazy nation, but not to someplace too exciting or disturbing, and I cannot recommend any journey more than following Tim Robinson to Aran. 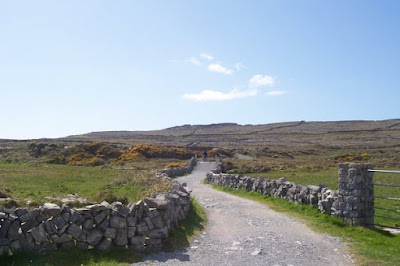 Robinson's wonderful map of the island is here. In 1934 Robert Flaherty (whose first film was Nanook of the North) made a film about life on Aran called Man of Aran that is still quite famous; you can watch the whole thing on YouTube.
Posted by John at 7:16 PM