Violence on the Iron Age Steppes 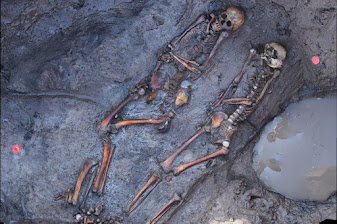 A new study of skeletons from Tuva on the steppes of southern Siberia shows a frightening level of violence in the early centuries CE. The inhabitants would have been steppes nomads related to the Scythians:

The study demonstrates that 25% of the individuals died as a consequence of interpersonal violence, mostly related to hand-to-hand combat, often represented by traces of decapitation. Even though violence affected mostly men, also women and children were found among the victims. Some of the individuals from Tunnug1 show traces of throat-slitting and scalping. According to Marco Milella, first author of the study "this suggests that violence was not only related to raids and battles, but probably also due to specific, still mysterious, rituals involving the killing of humans and the collection of war trophies".

What do you suppose "traces of decapitation" means? Like, are they maybe missing their heads?

Anyway this is the second study I have seen showing disturbing levels of violence on the Iron Age steppe. Seems to have been a very rough place.

Yes, I had already read that. It has happened cyclically in History, and in Europe mainly with eastern incursions. The Yamnaya, 2900-2350 BC, caused complete extermination of the people they fought during the invasion of Europe from East to West. Also many headless and armless skeletons proved that. On the other hand, they introduced the famous corded ware, a remarquable social evolution.

Mankind is bipolar. You can wonder at the best human realizations, you can be horrified at the worst. Everywhere. Maybe - maybe - just the arctic Inuit never comitted savage crimes against other humans.

That's why the message of Jesus makes no sense - though it's the most precious and noble of all social messages. If you say 'love your neighbour!' you suppose the other answers back 'yes, me too'. No, he'll just ignore.
But if you say 'I shell crucify you', the answer comes ' I'll crucify you first'.

For all of that I'm not Christian (or any other faith).