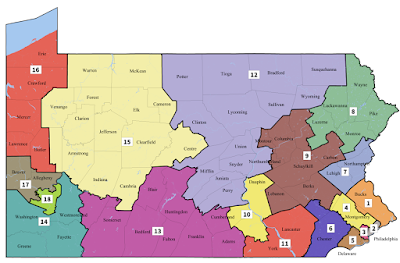 The Pennsylvania state supreme court ruled a month ago that the Congressional district map dreamed up by Republican state legislators was unfair and illegal. Since the legislature has not gotten around to making a map that would satisfy the court's demands, they court made its own map, above. Below is the previous map. CNN calculates that this will have a small effect on the election, perhaps helping the Democrats win one or two additional seats. 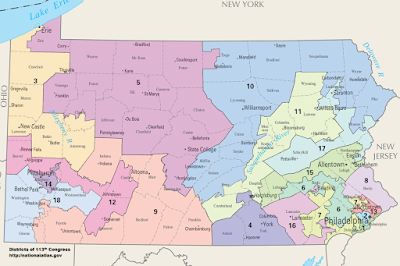 That bottom map is well on it's way "Holy Roman Empire" territory. Glad the courts have decided to take action against this corruption.

I'm going to have to bone up on the meaning of, the advantages of, and how to measure, compactness. I don't think the dictionary definition will suffice anymore. Does it require linear algebra? (Sides and edges, sides and edges.) Geography is one of those neglected factors when discussing local and regional politics, values, social mores, etc.

One way to define compactness is to measure the ratio of the circumference to the volume; the more compact, the lower the ratio. (Measured at some pre-determined scale.) If you're using this method you can also define any district boundary that follows an existing city, county or state boundary as straight, which rewards the boundary drawers for following those exiting lines.