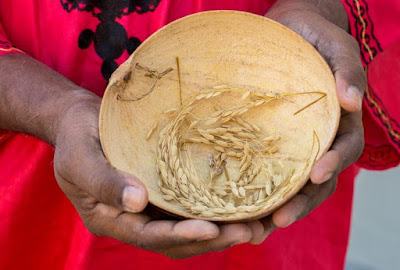 New World rice has long been a puzzle. Somehow eighteenth-century planters in the Carolina and Georgia Low Country raised huge crops of it, employing sophisticated systems of canals and dykes to control water flow. It became a staple of Low Country cooking, which most Americans know in the New Orleans version. But who knew how to raise it? Where did the seeds come from? Africans and Africa are the obvious answers, since many American slaves came from rice-growing regions. But this only changes the question to one of plantation sociology; who had the idea to grow wet-paddy rice in Carolina, and how did he convince someone with the necessary resources to make the investment? How was seed brought over? Who was in charge of the early operations? It certainly casts an interesting side light on low country plantation life. The variety of rice grown in the colonial south has lately made a comeback as Gold Rice, now often served by restaurants specializing in Southern food.

It seems that dry-land varieties of rice were also grown in the American, although information on this is very patchy. The one fact everyone agrees on is that Thomas Jefferson obtained a barrel of seed of African upland rice in 1790, grew some himself and sent packages to his horticultural friends; there are histories that make this the origin of all the upland rice raised in the South, although it might just be the only barrel of seed we happen to have a record of. Anyway that variety of rice was lost some time in the late nineteenth or early twentieth century, driven out of African American gardens by cheap commercial rice and changing tastes.

Now, though, botanists think they have found the North American strain of upland rice in an interesting place, growing on hillsides in Trinidad. As to how it got there:


But how did the rice travel to that field in Trinidad? Dr. Shields has a theory.

It begins during the War of 1812, when British soldiers promised land and freedom to a small group of West African slaves along the Eastern Seaboard if they would take up arms against their masters. They did, and each was given 16 acres of undeveloped land in southern Trinidad. They came to be called the Merikins, a Creole rendering of the word American.

One group was the Fourth British Marine Company, from the Georgia Sea Islands. The rice, which Dr. Shields believes can be traced to Jefferson’s barrel of seed, was among the crops the group brought with them to Trinidad.

Not only that, but genetic studies show that this rice did not originate in Africa, but in East Asia; the best guess is that it was transported to West Africa by Spanish or Portuguese sailors in the 16th or 17th century, long enough before 1790 that by then it was thought of as indigenously African.

The many ways the world was tied together by wooden sailing ships never cease to amaze me.
Posted by John at 8:45 AM