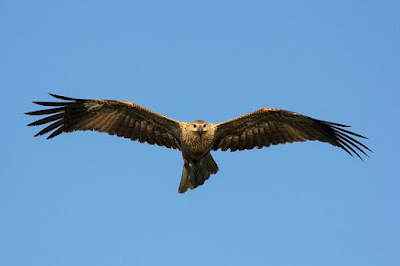 
When the dry season spreads over the tropical savannas of Australia’s Northern Territories, rangers start watching for the so-called firehawks: flocks of black kites, whistling kites and brown falcons that hunt near bushfires, snapping up small animals flushed out by the smoke and sparks.

If a fire begins to flicker out, locals claim, some of the birds will keep it going by carrying burning sticks to new locations.

“We get a lot of humbug” from the birds, said Robert Redford, a ranger who is an Aboriginal Australian. “We make firebreaks, and sometimes that bird makes another fire and he makes a lot of trouble.”

“He do a lot of damage for us sometimes, and rangers have a hard time firefighting with all that.” . . .

Now two scientists have published a compendium of these stories:


Over the course of two years, Bob Gosford, an ornithologist, and Mark Bonta, an assistant professor of earth sciences at Penn State Altoona, and their colleagues team collected older ethnographic reports and conducted detailed interviews with six eyewitnesses, including Aboriginal firefighters and academics.

They told stories of raptors stealing burning twigs from cook fires and transporting the brands up to a kilometer (about a half mile) away. One firefighter reported seeing a flock spread a wildfire all the way up a small valley.

A cattle station caretaker described a small group of raptors moving a fire front across a river, resulting in a blaze that wiped out much of the station infrastructure.

I love this sort of folklore. Sometimes it turns out to be true, and sometimes not. Nobody has yet posted a clear video of a hawk doing this, so for now it is best to be cautious. You can imagine why frustrated firefighters would try to blame the birds that always hover around fires for making their jobs harder. But to me this seems well within the intelligence of birds, so I don't see why it couldn't be true.
Posted by John at 7:51 AM

"You can imagine why frustrated firefighters would try to blame the birds that always hover around fires for making their jobs harder. But to me this seems well within the intelligence of birds, so I don't see why it couldn't be true."

Absolutely agree, and I would also note that Australian Aborigines have a rather strong culture of honesty and accuracy in stories. It would be fairly out of character for them to lay blame on the birds without at least some solid evidence of it happening. This also wouldn't be the first time that Aboriginal lore has helped science figure things out, as some of their ancient stories have given clues to discoveries about meteor impacts, tsunamis, and other events, accurately telling about things that took places hundreds and even thousands of years ago.

I could absolutely believe it of crows-- and believing it of raptors isn't much of a stretch from that.