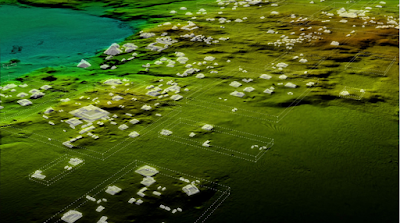 A massive airborne Lidar mapping project is revealing the great density of Maya settlement in the lowland region of northern Guatemala and southern Mexico:


In what’s being hailed as a “major breakthrough” in Maya archaeology, researchers have identified the ruins of more than 60,000 houses, palaces, elevated highways, and other human-made features that have been hidden for centuries under the jungles of northern Guatemala.

Using a revolutionary technology known as LiDAR (short for “Light Detection And Ranging”), scholars digitally removed the tree canopy from aerial images of the now-unpopulated landscape, revealing the ruins of a sprawling pre-Columbian civilization that was far more complex and interconnected than most Maya specialists had supposed.

“The LiDAR images make it clear that this entire region was a settlement system whose scale and population density had been grossly underestimated,” said Thomas Garrison, an Ithaca College archaeologist and National Geographic Explorer who specializes in using digital technology for archaeological research. . . . 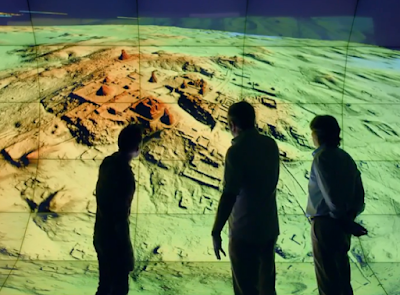 So the lowlands where Mayan civilization was centered were very densely populated, something like the Nile Delta. We tend to imagine Maya civilization as cities isolated from each other in jungle clearings, because that is what is there now. But in Classic times this whole landscape was cleared and tamed, the swamps drained and turned into fields, the cites and towns linked by highways or canals.

Some people looking at this new data think the Mayan population must have been more than 10 million, perhaps 15 million. If so, the collapse at the end of the Classic period (around 900 AD) was even more dramatic than we thought. It wasn't just cities that fell, but a whole landscape that went to ruins: canals, highways, villas, and so on. 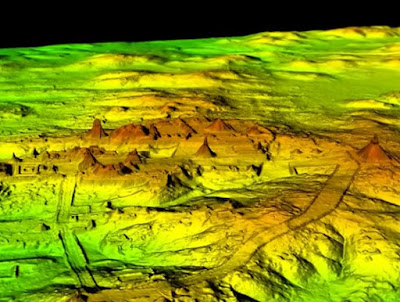 What is needed now is a lot more chronological information from all those villas and canals; how much did the landscape depopulate when the great states collapsed, and how quickly? Right now, nobody really knows, except that the whole place was jungle when the Spaniards first saw it. I find it fascinating to imagine such an elaborate techno-cultural entity disappearing within a century or two. Civilizations, it seems, really can collapse.

I also wonder about all those roads, and the paucity of obvious fortifications. To judge from the inscriptions, these people made war on each other all the time. Why didn't they at least erect forts on the roads connecting their cities to those of their enemies? Was warfare carefully calibrated so as not to disturb the all-important drainage canals and trade routes? Did that gentlemens' agreement eventually break down, causing or helping to cause the collapse?