Ground Broken for the World's Most Dangerous Pipeline 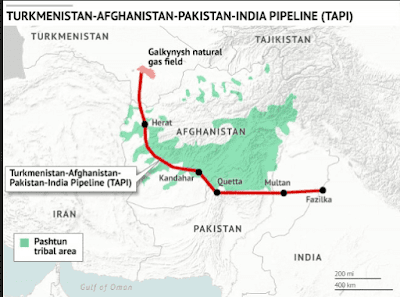 The world's latest experiment in "pipeline diplomacy" is finally underway in Afghanistan, more than twenty years after it was first proposed. Groundbreaking took place this morning in Herat for the TAPI gas pipeline, so-called because it crosses Turkmenistan, Afghanistan, Pakistan and India. This route was originally envisioned because Russia kept cutting off shipments of gas from Turkmenistan through its pipelines, and the obvious route across Iran had its own share of political difficulties. (Especially that it would open a big hole in the sanctions then in place against Iran because of its nuclear program.)

But if you're wondering how a pipeline across Afghanistan and Pakistan's tribal areas could possibly be safer and more reliable than any other imaginable route anywhere, well, a lot of people agree with you. Pressure has continued to build this line because the world would really like Afghanistan to have some economic alternative to opium poppies, because people would really like to do something for Afghanistan besides drop bombs on it, because peace factions in Pakistan and India really like the idea, because Turkmenistan really hates depending on Russia, and because India's potential demand for natural gas is enormous. Whether all of this will be enough to see the line through to completion remains to be seen.

And if it is built, what will happen to the $400 million a year in transit fees this is expected to earn for Afghanistan? Seems likely to me it will disappear into a nexus of corrupt dealing. But maybe that would actually help; I mean, it seems better to me for Kabul and the Taliban to make a back room deal dividing that money than to keep shooting and bombing each other. In the longer term this could lead to the development of smaller gas fields in Afghanistan itself, since both the proximity of the pipeline and the evidence that the warring factions can be bribed into partial peace would encourage investment.

I'm not especially hopeful, but when it comes to Afghanistan anything positive is worth cheering.
Posted by John at 8:12 AM

and yes, the real reason for an endless war in afghanistan comes clean. it's not for oil, but for passage of oil.

This is a terrorist act and ensuing environmental catastrophe just WAITING to happen.