George Saunders, "Lincoln in the Bardo" 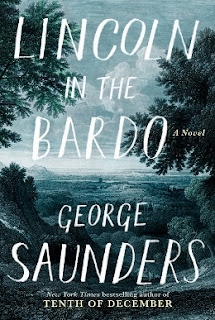 I've been trying to figure out why this strange book won the 2017 Man Booker Prize. My guess is that it comes down to:
Lincoln in the Bardo is George Saunders' first novel. It focuses on the death of Willie Lincoln, the President's son, in 1862. Willie died in the White House, according to some accounts as his parents were holding a diplomatic soiree downstairs. He was then temporarily interred in a tomb at the Oak Hill Cemetery in Georgetown – a place I often walk and of which I have posted many pictures. According to Lincoln lore, the President visited the tomb more than once over the next few days to hold the boy's body. Saunders tells this part of the story mostly by hundreds of short quotations from contemporary narratives, citing everyone from the butler and an Irish maid to senators and ambassadors. Some of these flatly contradict each other, creating a case study in what can and can't be known for certain about the past.

But the mostly factual part is less than half the book; the rest is ghosts and the afterlife. "Bardo" is one of the Buddhist terms for the place where souls wait before they are reincarnated, a sort of nebulous halfway world neither one thing nor the other. Most of the novel is set in such a halfway place, a parallel spiritual dimension inhabited by ghosts whose bodies are interred at Oak Hill. These ghosts resist passing on to wherever they are supposed to go because of unfinished business – marriages unconsummated, deaths unavenged, promises unkept – or because they are simply afraid of where they might end up. So they hang around, bickering, joking, telling the same stories for the hundredth time, trying to convince each other that they are not really dead. In the recorded version each is acted by a different reader, creating a cacophony of voices. The genius part of the writing is that although this place is absurd and the ghosts ridiculous, I enjoyed the telling and found myself deeply wrapped up in this netherworld and the fates of its inhabitants.

The arrival of a president's son in the graveyard of course creates a great stir, and his father's repeated visits cause amazement, consternation, and then a crisis, because Willie's ghost enjoys the visits so much that he won't move on, either. It's even weirder than a short summary can convey, but strangely powerful. This part also includes what may be the best page or two ever written about Abraham Lincoln.

So, I liked it, which I suppose makes it one of the four or five "experimental" novels I have enjoyed. If you like weird books, give it a try. But I would not have given it any prizes.
Posted by John at 12:57 PM