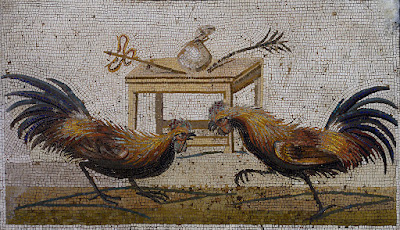 Curious. What are the objects in the background?

Presumably the Caduceus has something to do with propitiating Hermes / Mercury for luck to win the bet with, but what of the plant? If it's grain, does it have something to do with the health or fertility of the cocks? Could it merely represent another form of wealth that might be included in the bet, since it is a valuable commodity? If it's not grain, could it be some sort of herb or drug given to the birds, to improve their performance? Or could it be something else entirely, even?