The Women of Segregation 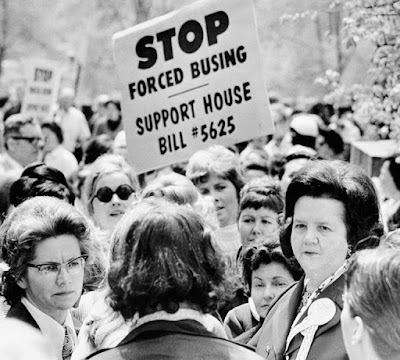 Fascinating article by Elizabeth Gillespie McRae in the Times:


In minimizing the grass-roots work of women, the framing of white supremacist politics was no different. Just as Ms. Robinson and Ms. Gilmore led the 1955-56 boycott of buses in Alabama, in the 1970s, women like Louise Day Hicks led the antibusing crusades in the North, in an effort to avoid the desegregation of Boston public schools. While men debated in legislative chambers and listened to challenges on the bench, women headed to school cafeterias, playgrounds and PTA meetings, doing the bulk of the behind-the-scenes work of supporting the politics of segregation.

The point, here, is neither to catalog nor to celebrate white women’s contributions to white supremacist politics. Instead, their work should change how we understand history. It is easy to denounce the racist pronouncements and white-supremacist politics of a George Wallace or a Roy Moore. But what white women teach us is that white-supremacist politics is sustained at a much more grass-roots level by our neighbors, school boards and even friends. White women have made white supremacy a much more formidable and long-lasting force in American society, sustaining it at both the local and national levels.

Liberals have long wanted "equal rights" to be a struggle that unifies all oppressed groups – minorities, women, the poor – but of course it does not work like that at all. The anti-busing movement of the 1970s in particular was very much a women's movement.
Posted by John at 1:25 PM

The problem is, we've known for a long time that people who come from backgrounds of oppression tend to themselves become oppressors once they gain even the slightest degree of acceptance and status.

There's an old Puch magazine political cartoon which depicts a motley assortment of Americans of immigrant stock - an Irishman, a former slave, a former Union soldier, an a Frenchman, a Jew, et cetera - all working together to build a great big wall along the coastline to keep other immigrants out.

Meanwhile, in the background, on the far shore, Chinese laborers toil to tear down the walls keeping them locked in their own country, and attempt to flee across the mighty Pacific in rowboats. The rowboats pass under the sides of a towering, black-hulled ship belonging to the US government, unloading cargo which gets hoisted over the Chinese wall by a crane.

We're more than happy to trade with the brutally repressive government of Qing China, but we want nothing to do with the Chinese people themselves. Nevermind that it's our trading with China which directly inspires them to seek out freedom and opportunity upon our own shores. We sail triumphantly into their harbors, ostensible paragons of liberty and democracy, but then we expect them to go about their business and keep toiling to death for the Emperor's sake, and turn them away when they beg to be allowed to join us and toil for our sakes instead.

Typo - "Puck" magazine. I think my brain tried to subconsciously edit it to "Punch" and didn't quite get there.

Or a mother's movement?

@Shadow- yes, I imagine ant-busing was very much a mother's movement.