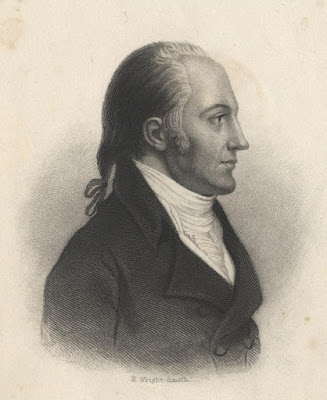 I wasn't sure how I would react to this book. Gore Vidal is a notorious cynic about America, and I was afraid his portrayal of the Founding Fathers would be too hostile for me to enjoy the story. But I loved it. It is cynical, yes, but there is always plenty in politics to be cynical about, and I didn't think Gore's Burr said anything for which a case couldn't be made. At times he is even generous, especially to George Washington as president.

Burr is set in the 1830s, in the years just before Burr's death. There are two narrators. One is a young clerk in Burr's law firm who wants to be a writer and sets out to write Burr's biography. The other is Burr himself, who decides to cooperate with his clerk and ends up narrating much of his life story. The elderly Burr is a terrific character. He is cynical and worldly wise and has many scores to settle, but he also has a sweetness that shows in things like his love of children, his enduring love for his long dead daughter, and the paternal way he helps and advises his clerk. The two biggest problems with the book are, first, the clerk, who bored me, and second a disconnect between Burr the elderly memoirist and Burr the young, ambitious politician. The older Burr is so sane, so wise, that it is hard to imagine him engaging in the savage political battles that marked the younger Burr's life. I could not imagine that he ever tried to conquer Mexico, or shot Alexander Hamilton.

That aside, the book is a delight. I will probably never again be able to imagine any of the Revolutionary leaders without hearing Vidal's descriptions of them. Here Burr meets Thomas Jefferson in 1791:


A rather large limp hand touched mine. I am not usually conscious of height but with Jefferson I always felt in danger of a crick in the neck as he obliged me — obliged everyone except those few who were at his eye level — to look up into that freckled fox face with the bright hazel eyes, and delicate thin-lipped smile.

"Colonel Burr, what an honour!" The voice was low but beguiling, particularly when he slipped into one of his reveries and words would flow beautifully, inexhaustibly, sometimes interminable, yet never entirely without interest for one always found good things even has he found them in that fine speculative torrent. He was the most charming man I have ever known, as well as the most deceitful.

Besides the writing, the most impressive thing to me was the way this 1973 book anticipated the whole direction of American history since then. Race and slavery loom in the background, and there is a whole section on Sally Hemmings and her descendants. The yellow fever epidemics of the 1790s are described in several scenes; these were completely omitted from my own education but my children all read a whole book about them in the 6th grade. Vidal does not portray eighteenth-century men as contemporaries in outlandish clothes, but makes an effort at what one might call historical ethnography, putting them in their own culture with its own assumptions.

If you like novels and American history, read it.
Posted by John at 8:37 PM