K'wati and the Red Lizard 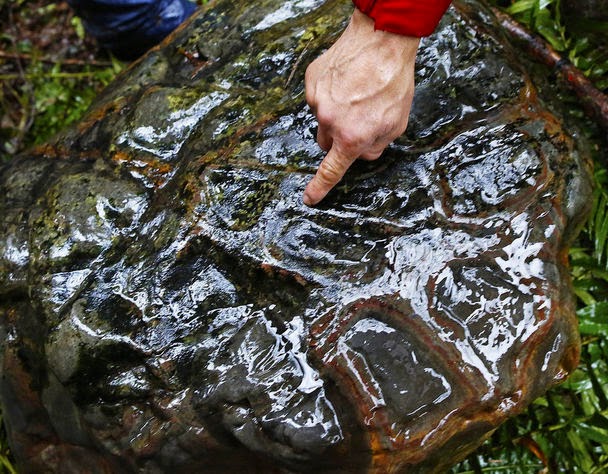 A fisherman recently discovered a rock  in the Calawah River, Washington state, covered with carvings. They seem to depict a famous legend of the Quileute Indians, the battle of K'wati and the Red Lizard:


The Red Lizard, according to Quileute legend, made his home near the narrowest point of land between the Calawah and Sol Duc rivers and stopped people using it as a shortcut from one to the other. K’wati, a figure of good who was known as the “transformer” and turned the Quileutes from wolves into people, eventually killed the Red Lizard, who had a much poorer reputation.

“He was a very bad monster ... his urine, actually, if you stepped on it, it would kill you,” Quileute Tribal Councilman Justin “Rio” Jaime told those gathered at the ceremony.

The rock will go on display in La Push, as a welcome addition to help tell the tribe’s history. Of this, the Quileute don’t have much — in the late 1880s, a European settler set La Push afire. Along with homes and fishing equipment, the tribe lost almost all its pre-contact artifacts.

One way you can tell there is a fight going on is that  one of the creatures on the rock is sticking out its tongue, the worst possible gesture for these Indians.
Posted by John at 2:55 PM