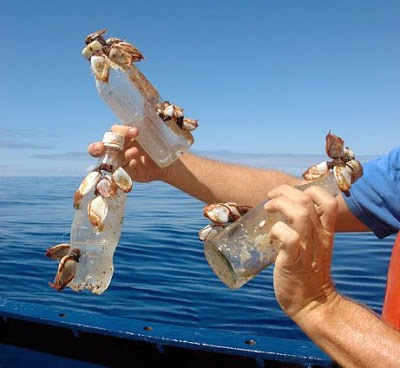 While some non-scientists are still caught up in fantasies of giant ocean garbage patches, scientists have accepted that there are no such things. This leaves the question of what happens to all the plastic that must be washing into the oceans. Some of it, we know, gets pulverized into tiny, tiny pieces. But now the most thorough study yet finds that there isn't all that much "microplastic" either:


More than 5 trillion plastic pieces, with a combined mass of more than 250,000 tonnes, are floating in the ocean, researchers reported on 10 December in PLoS ONE. On its face, the estimate is shockingly high — but it is still much lower than expected, amounting to less than 1% of the annual global production of plastic, says study co-author Hank Carson, a marine biologist at the Washington Department of Fish and Wildlife in Olympia.

So where is the plastic going? People have looked on the sea floor and in Arctic ice and in the fat deposits of seals, but no luck. One of the hottest questions is whether bacteria might actually be digesting it; there is some indirect evidence that this is happening but as yet nobody has isolated a plastic-eating microbe. It sounds like a great thing for bacteria to be eating our trash, but sometimes when bacteria eat something noxious their waste products are even more noxious.