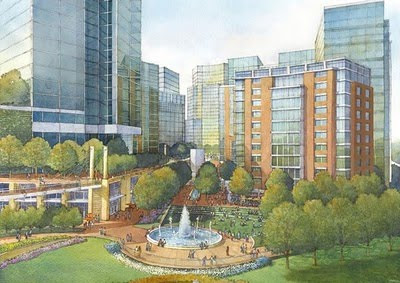 I just learned about the plan, launched by Fairfax County earlier this year, to transform the beltway exit known as Tysons Corner into a real place. There are 100,000 jobs in this pile of unconnected office buildings, but despite the urban density of the building it is nearly impossible to walk anywhere. I once visited a friend who was working there for lunch, and to walk from his building to a cafe in the next building we had to cross an immense parking lot, climb a concrete wall, slip through a gap in a chain link fence, and cross another parking lot.

But construction is finally beginning on the Metro Silver Line, which will include four stations in Tysons Corner, and the plan is to turn Tysons into a livable urban area with 100,000 residents and dozens of street level shops and restaurants. The first major private project to follow the new guidelines has just been announced by Capital One, which hopes to turn its vast parking lots into a campus of residential and commercial buildings.

It seems that at least some of America is recovering from the Era of Ugly Buildings and Uglier Parking Lots and moving toward building places where people will be happy to live.
Posted by John at 10:05 AM