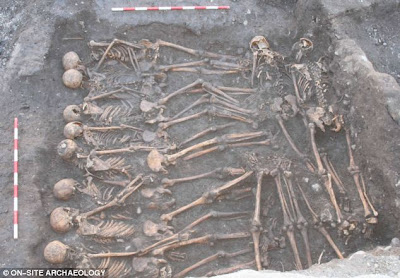 Archaeologists working outside York in England have uncovered several mass graves that are probably the remains of Parliamentary ("Roundhead") soldiers who died of disease during the siege of York in 1644. During this siege the expected conditions were reversed. The royalists within the walls had plenty of food and shelter, but the besiegers outside went hungry and suffered terribly from cold and disease. The siege ended with the Battle of Marston Moor, a crucial victory for the Parliamentary side.

And while I'm on the subject, let me note for all you fans of romance novels, admirers of "cavaliers," doters on Bonnie Prince Charlie, and the rest of your slavish, reactionary, king-worshipping cabal, that all virtue was with the Parliamentary cause in that war. Anyone who wastes a tear for Charles I -- of whom let it be said, as it was said of old, "the memory of the wicked shall rot" -- deserves to languish under arbitrary dictatorship, deprived of all rights except that of watching kings and nobles parade by on public occasions looking grand in the golden finery paid for by your sweat and blood.

"deserves to languish under arbitrary dictatorship"

A short-lived product of the revolutionary period, necessary to defeat the reactionaries and pave the way for freedom. You can't make an omelet without breaking a few eggs.