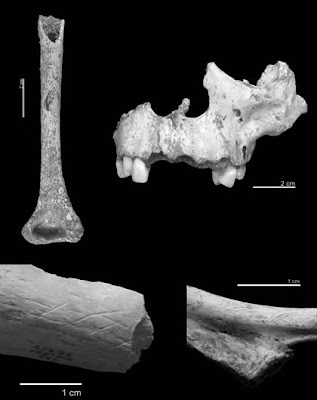 Cut marks (slicing, chop, and scraping marks) on the cranial segment are abundant on the base of the temporal bones, face, and zygomatic bones: segments with a large amount of muscular attachments and ligaments. Cut marks found on the face indicate skinning and defleshing activities. Cranial fragments also display abundant evidence of breakage (percussion pits and adhered flakes) mainly located on the lower part of the cranium. The majority of zygomatic bones are broken in a similar manner to those documented in Native American cannibalized remains and Neolithic (post 9500 BC) individuals.

One nice detail is that the butchering process seems to have been the same for humans and other animals.
Posted by John at 1:04 PM