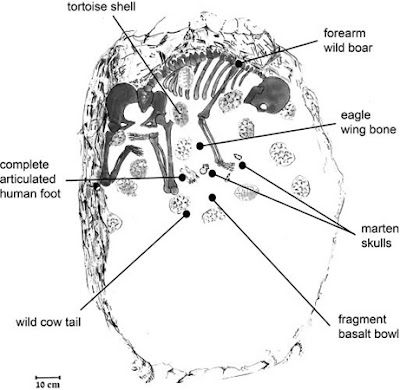 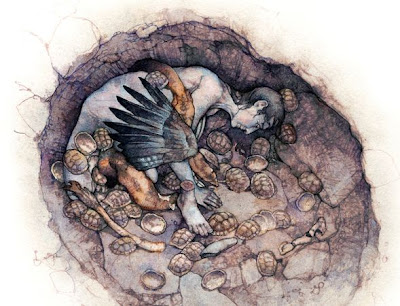 In an Israeli cave called Hilazon Tachtit, archaeologists have uncovered the burial of a woman who died at the end of Paleolithic times. She was just under five feet tall, about 45 years old, and she was a very special person:

Some 12,000 years ago in a small sunlit cave in northern Israel, mourners finished the last of the roasted tortoise meat and gathered up dozens of the blackened shells. Kneeling down beside an open grave in the cave floor, they paid their last respects to the elderly dead woman curled within, preparing her for a spiritual journey.

They tucked tortoise shells under her head and hips and arranged dozens of the shells on top and around her. Then they left her many rare and magical things—the wing of a golden eagle, the pelvis of a leopard, and the severed foot of a human being.

The discoverers interpret their find as the tomb of a shamaness, and I am sure they are right. The eagle wing, representing flight to the Other World, is particularly evocative. Shamans in many traditions walk with a limp or have problems with one leg or foot -- among some Siberian tribes a shaman who has the misfortune of being healthy will fake a limp during rituals. And this shamaness fit the type perfectly:

Analyses showed that this woman had suffered from a deformed pelvis. She would have had a strikingly asymmetrical appearance and likely limped, dragging her foot.

This great religious leader was laid to rest with all the ceremony her people could manage. Next to her tomb they held a great feast that included the meat of wild boars and the dangerous aurochs, the wild ancestor of modern cattle. In later years they returned to bury others of their people in her cave, and held more feasts.

It is an amazing find, the kind that takes us back across thousands of years and brings us face to face with people long dead, and a world nearly forgotten.
Posted by John at 9:39 AM

Very interesting! Thanks for sharing.