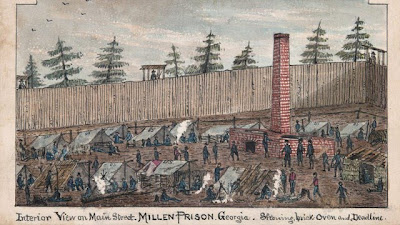 Archaeologists working in Georgia have discovered remains of Lawton Prison, a major camp for Union POWs in 1864. Union mapmaker and compulsive sketcher Robert Sneden was imprisoned there for a while, leaving us several drawings like the one above. Note the fence marking the "dead line" -- any prisoner crossing that line would be shot.

Life in these prisons was miserable. Lawton's predecessor, Andersonville, gets most of the attention for its fearful death rate, but some Union prisons had death rates nearly as high. Neither side ever invested enough in the prisons to make them livable, although some of the best Union prisons did approach decency by the end of the war.

During the early years of the war, prisoners were regularly exchanged between the two sides. At first this was informal, arranged between officers, but eventually the governments negotiated a formal protocol. This agreement set the value of various kinds of captives as follows:

In 1863 the Union started using large numbers of black soldiers. The Confederate government considered all these men to be runaway slaves and refused to exchange them, and at one point threatened to hang all white officers of black regiments as insurrectionists. Grant quashed that threat by threatening to hang ten Confederates for every Union officer so treated, and the Confederates gave up on that item. But the Confederate government refused to treat black captives as soldiers. Grant, backed by Lincoln, declared an end to all prisoner exchanges until the Confederacy would agree to treat black soldiers equally. He had two reasons for this; one, he really hated the thought of his soldiers being enslaved, and two, he figured that since the North had so many more men to call on, the ending of exchanges would help the Union cause.

The end of exchanges meant that tens of thousands of captive soldiers had to be kept indefinitely, at great expense. Also, for the first year or so Confederate leaders expected exchanges to resume at any time, so the measures they took for housing prisoners were intended to be temporary. By the end of 1863, the Confederate government was also on the verge of bankruptcy, spending all the money they had on the war and the care of wounded veterans. So the prison system was underfunded and put in the care of men who didn't mind starving a few thousand Yankees, with predictable results.
Posted by John at 7:13 AM