The Quiet Death of the Suburban Office Park 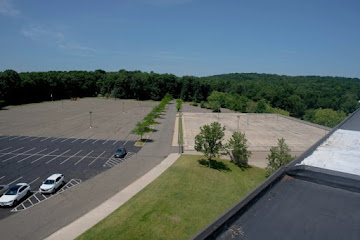 Fascinating NY Times on the decline of the suburban office park Many have been killed off by a combination of working from home and a preference for having offices surrounded by restaurants and stores, not greenery. Many of these parks were designed to provide a quiet place for intensive work: your own cublicle with a view of trees out the window. But

The office today, experts say, needs to have things your home doesn’t: meeting rooms, common spaces, nearby delis, other humans. The home office has essentially replicated the most valuable thing about suburban office parks — the quiet place to focus.

It’s a fitting end for the original concept: Offices meant to evoke and blend in among suburban homes have been cannibalized by actual homes. 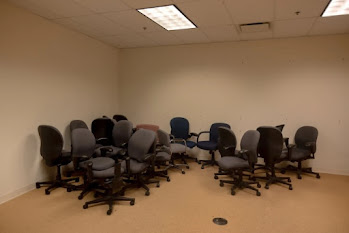 As to what will happen to these complexes, nobody knows. Some will be demolished to make room for housing or warehouses. A few may be remade into grander complexes resembling small towns that include lots of restaurants and retail. Others will probably languish for years. 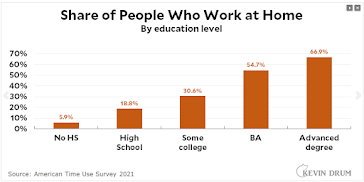 It's worth pointing out another problem with commercial real estate: while most workers can't work from home, the most economically valuable often can. Thus the people whose salaries make it worth companies' while to invest in expensive office space – engineers, economists, managers – are the ones least likely to be in the office every day. This puts even more pressure on companies to cut back on their office spending than just the raw number of people in the office would indicate.
Posted by John at 9:56 AM

The Quiet Death of the Suburban Mall.

The Quiet Death of the Suburban Movie Theatre.

The Quiet Death of the Suburban Department Store.

Son works IT from both coasts and in between, with teammates fro Africa (Nigeria), whose skill levels are excellent. His company is giving up their office space as soon as their lease is up. Rumor is that the whole building will become condos (San Diego). Have heard, through family, that a very large Richmond VA firm’s efficiency has gotten massively high during the work from home period (400%)!. Niece (World Bank) has gone to partial WFH, but would love to do more at home. Daughter-in-Law WFH in PR and media and loves it (in CA for Navy Fed.
We are in a transition and we’ll see this come to be regularized in future years. Anecdotes not Data, but there’s a trend

Son-in-law works for Big Aircraft, in project finance management. About a year into the pandemic, he was told he'll be working from home permanently.

Daughter works for a Big Insurance Company, in instructional design and implementation. She's been working from home since the 2020 shutdown. The company has started requiring regular appearances in the office for many departments; while they have a nanny for their 14 month old son, my daughter was reluctant to be away from home that often (3 days a week minimum). She arranged to transfer to a department where she is permanently work-from-home status. She's worked with this department before (also instructional design stuff), and one of her favorite co-workers lives in Wisconsin (company is in Hartford CT)... permanent work from home; another is in Richmond VA, same thing. She's far happier not worrying about having to leave home.

Offices are a relic of the time before cheap and abundant bandwidth.