Mikhail Bulgakov, "The Master and Margarita" 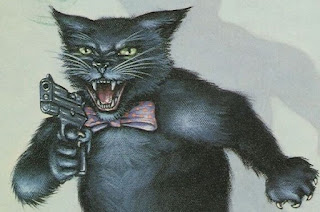 Bulgakov's novel is, we are assured from all directions, a serious work, a first-rate satire of Stalin's Russia, a deep meditation on atheistm and faith, a very profound thing. I very much enjoyed it, but I am left a bit puzzled about its supposed seriousness. It found in it much more of the rollicking romp than I did of philosophy. But maybe that is the secret of its appeal; here is a book that is fun to read but nonetheless can be seen, if you look at it in the right way, as a serious work that takes on subjects that range from office etiquette to the nature of Jesus and Satan. You can thus cross a classic off your list and have a good time doing it.

Mikhail Bulgakov (1891-1940) began writing The Master and Margarita in 1928. In 1930 he burned the first draft, supposedly in despair over the impossibility of real writing under Stalin's regime. But he went back to it repeatedly and by the time of his death he had a nearly completed manuscript. Not entirely complete, since there were sentences and paragraphs that broke off in the middle, but enough that attempts were made to publish it. These were unsuccessful until 1966, when a version from which about 12 percent of the text had been expunged was published in Moskva magazine. Then – and I find this very telling about the Soviet regime of that period – samizdat copies of the missing text immediately began to circulate widely. The whole thing was soon published in Paris, and eventually made its way back to Russia. It became a cult classic in the West, and there were numerous translations in all the major languages, some brought out by tiny presses. There is, I discovered today, a bitter debate about which is the best translation into English. I listened to the one on Audible, by Michael Karpelson, and it seemed fine.

The plot of The Master and Margarita has three main threads. The first and largest tells what happened when the devil came to Moscow in the guise of a stage magician. The second is the story of Jesus' execution, told in a realistic vein from the viewpoint of Pontius Pilate. The third focuses on the title characters, a struggling would-be novelist we know as the Master and the woman who loves him. I found the retelling of Pilate's fateful encounter with Jesus interesting and enjoyed those sections. The Master, who seems to be largely autobiographical, and the loving Margarita didn't do much for me, but that part is short. The main narrative is all over the place. It is absurd, silly, rambunctious, and sometimes makes no sense. It contains some great satire on bureaucracy of the Soviet variety, but there is just as much on the greed and lust of the bourgeoisie that could have been written at any time in the nineteenth century. It features flying witches, a talking cat, Satan's annual ball, currency that magically changes from rubles to dollars to worthless paper, Soviet-style real estate scams, office politics, and a senior official who is replaced by an animated suit that does his job perfectly well, once the other employees get over the shock of it. It's terrific fun but I found the satire very mild and didn't really understand what about it was controversial; maybe the censors just had a quota of text to cut.

I wanted The Master and Margarita to be darker. This Satan isn't anywhere near as wicked or powerful as Stalin, nor is his evil much like that of the Soviet state. Instead of any kind of meditation on evil, we have a madcap adventure in devilry. If that sounds interesting to you, read it; it is creative, witty, charming, and goes by very fast.

There is, I discovered today, a bitter debate about which is the best translation into English. I listened to the one on Audible, by Michael Karpelson, and it seemed fine.

Russian has the reputation of being notoriously difficult to translate, and my own experiences with it seem to back this up. Russophones (like Anglophones) adore colorful, poetic turns of phrase that rely on a lot of nuance, idiomatic understandings, figurative usages, double meanings, etc. This often makes any attempt at translation a serious compromise, unless you are willing to fill the bottoms of pages with detailed footnotes which carefully explain all the complexities of what is being said.

In my experience, many translators opt for simple clarity and a focus on the final intended meaning, over depth of meaning, cleverness, wordplay, etc. So while I'm sure the translation you listened to was indeed fine, I can easily imagine a lover of the Russian language lamenting the loss of a certain degree of entendre and linguistic cunning. In particular, the Russians adore rhyming, and that sort of thing almost always fails to make it across the language barrier.

THis currently the mandatory lecture in Poland. When I left the school, it wasn't, but I kept being told by friends how good it is. FInally I decided to give it a go and I was a bit dissappointed - I do not know why it had such appeal to my friends. The version I had was the version prepared for high schoolers, so it had a lot of commentary pointing out, in all seriousness, "in this fragment the hipocrisy of the system is exposed" etc. It was at times more fun to read than the actual lecture.

Shoutouts that M&M is a great critique of the Soviet system are greatly overblown. There are certainly better ones, The Case of Comrade Tulayev being one. The non-Jesus parts were fun, entertaining, and foolish. The Jesus story was interesting and very different from the other parts ofd the boojk.